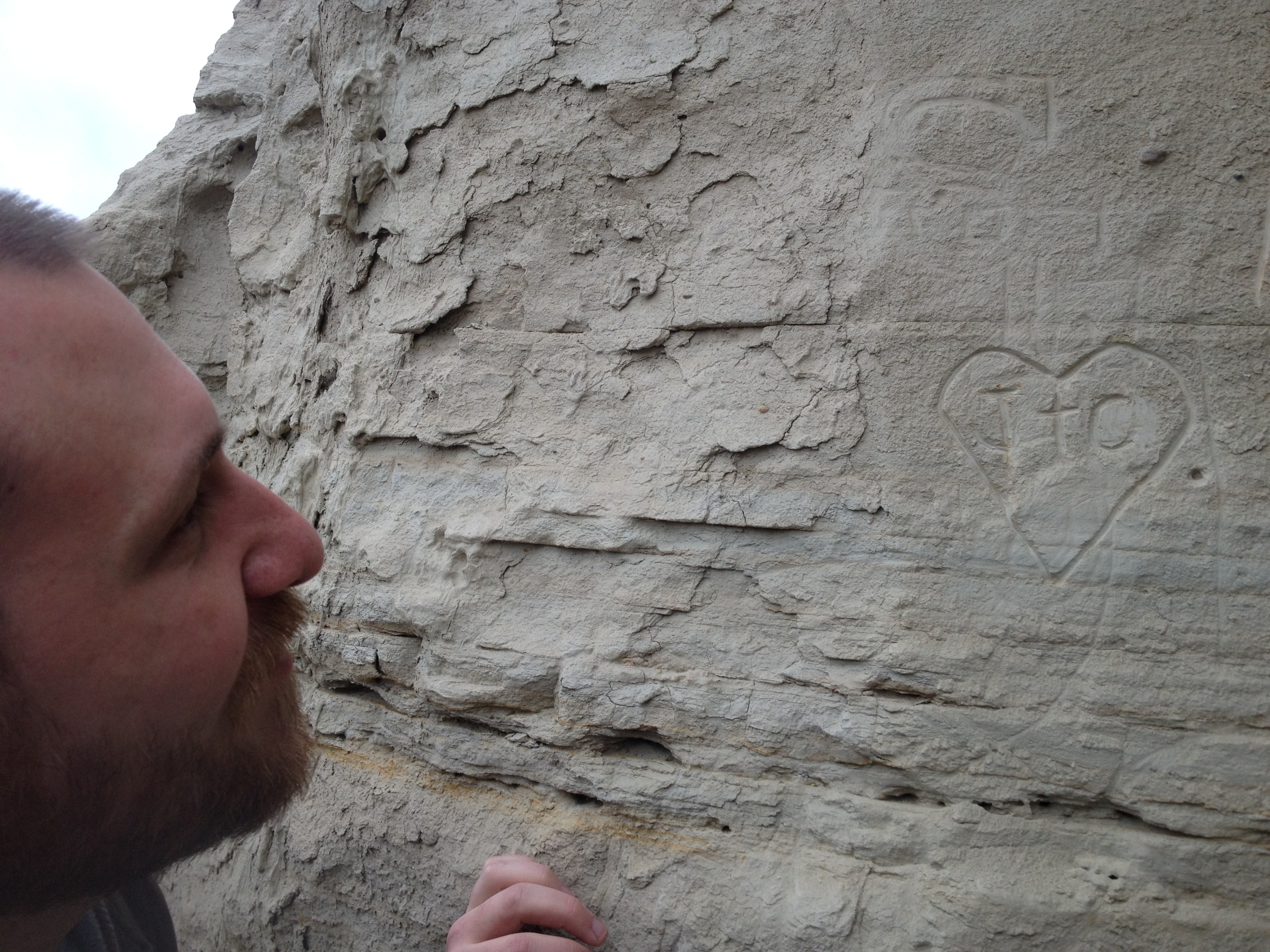 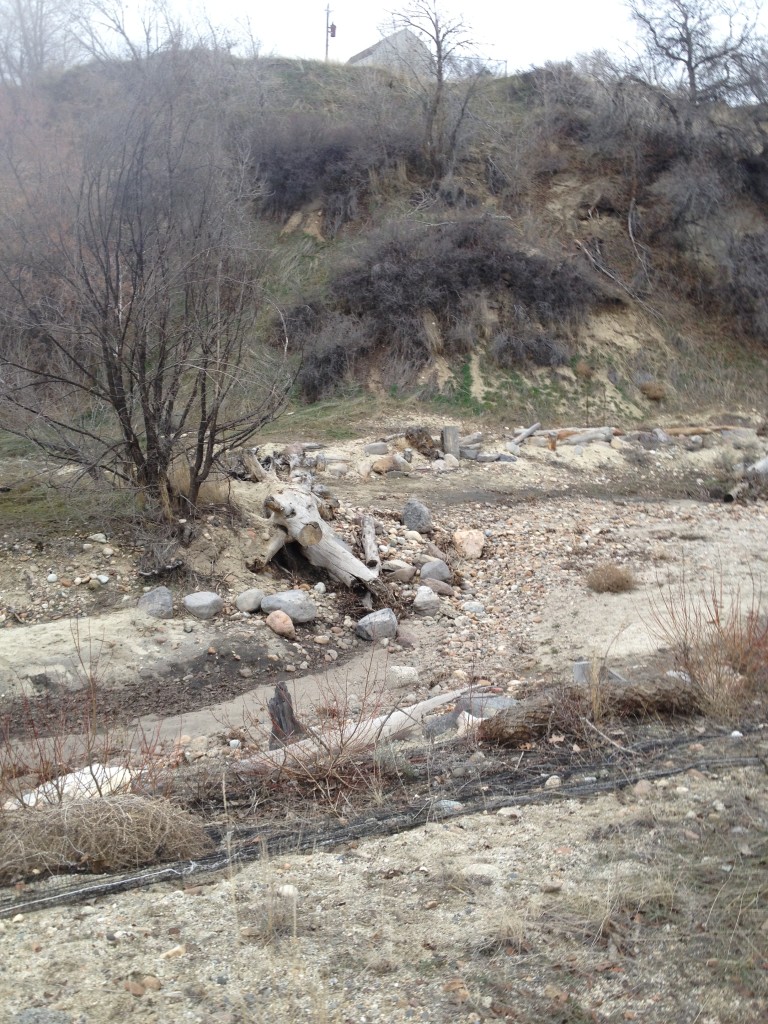 Pretty much the entire canyon from 1300 East on looks just like this. 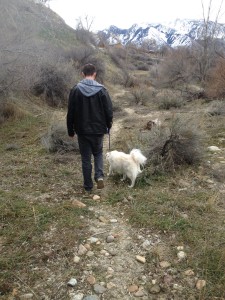 Bring your dog. No one cares.

Dimple Dell Canyon is a park that runs east-to-west through suburban Sandy, Utah. It’s basically a canyon, go figure, that begins around State Street and ends on the mountains. There are several entry points along the way, with one of the best being on 1300 East and approximately 10000 South. I’d actually lived in Sandy for a few years before realizing that this even existed, and mostly only found out because the BF was raised nearby and was pretty familiar with it. It’s a pretty big park/canyon, so we really only walked through the area stretching from around State Street to about 1300 East. The BF, daughter and I decided to take a nice walk through here on Valentine’s Day last year, which I will now write about in honor of Valentine’s Day. (It was, btw, an awesome way to spend the day.) 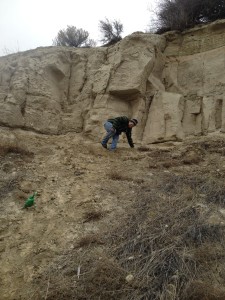 The rapidly eroding sides of the canyon in the western end. I was a bit concerned for the homes built on the edges.

Apparently everyone else in the area is totally aware of it. We based this off the fact that there was horse and dog poop everywhere (apparently the area east of 1300 in particular is super popular for horseback riding) as well as all the trash, carvings, and so on. We actually didn’t see too many people that day, even though it was pretty nice out for being February.

Honestly parts of this park really freak me out. The sides are made of… um… sandstone or something. I don’t know, I’m not a geologist. But whatever rock it is, it chips away super easily and I’ll bet that doesn’t bode well for all the houses that are built on either side of the canyon. Seriously, I hope someone is looking into this. Kinda scary. Anyway, the entire canyon is basically a runoff zone for rain and melting snow coming from up in the mountains on the east side of SLC.

Anyway, we climbed up to the sandy stone (again, I’m not a geologist) and carved our initials into it. I’m willing to bet, given the ease with which we carved these initials, that they’re completely eroded and gone by now. I’m also betting if we carved a little too hard, we would have caused a landslide that would take down the houses on the north side of the canyon. So we were careful. 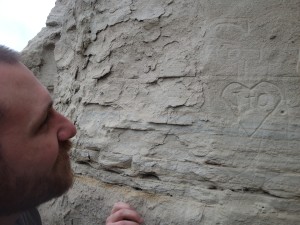 We did this on Valentine’s Day, and this right here is as romantic as I get. 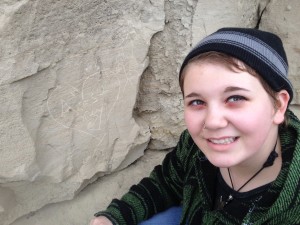 Sera didn’t want her dog to feel left out. 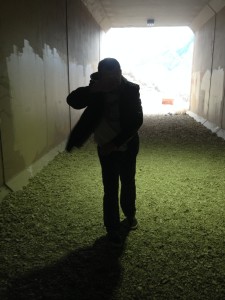 Walking through the windy tunnel under 7th East. You’ll basically be walking like this the whole way.

I’ve heard the city periodically has to clean it out because homeless people just sort of settle down there. Which makes sense, because of all the old furniture and places to take shelter, I guess. So there’s just junk all over the place, mostly lining the middle of the park. Branches, rocks, garbage, etc. I was disappointed that we didn’t find a body in an area that seemed so ripe for finding a body. Anyway, speaking of garbage, it’s freaking everywhere here. The city is clearly trying to make the park nicer, with there being spots with nice benches and a bit of landscaping, but mostly this whole place feels a bit dumpy.

It actually gets a bit nicer the further east you go. It starts looking less like runoff and trash and more like trees, a stream, and less-obvious trash.

Look, it’s a city park. You can’t have high expectations. But I will say that as far as parks go, I actually really like this one. We went back to the far eastern end later that year, when it was warmer, and even though I don’t have pictures of it, it was pretty nice. Shady, cool from breezes coming off the mountain and through the canyon, and just chock full of horse urine and poop. Seriously, anywhere east of 1300 East, bring some hip waders. It was gnarly. I don’t know how we managed to walk back around there for hours without actually seeing any horses while also managing to find literally all of the horse pee, but it happened. Along the eastern part of the park, there are a ton of entry points for horse trailers and horses, so it wasn’t too much of a mystery, but still. Ew. 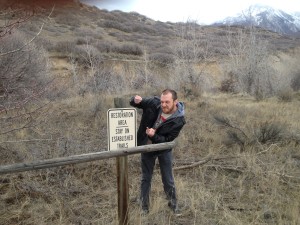 This is Jon. Jon’s a rebel. Jon wasn’t following the rules. Don’t be like Jon.

Aside from wading through urine-soaked mud, we also found the foundation of some ancient building with a chimney and everything. Totally weird, and if you know where that came from, please let me know. Also, Jon was dive-bombed by a hawk and I found the bones of some tiny animal that had probably been eaten by something like a hawk. It was pretty cool. I really liked this side of the park, even though I got few pictures. Anyway, that area is much shadier and has a lot more trees than everything west of 1300 East.

The area we were in on Valentine’s was barren in the winter, for the most part, but I bet it’s downright nice in the summer or fall. This is one of those types of places that you go to if you just like jogging a few times a week, or you have a horse, or if you’re a kid looking for a place to smoke weed without your parents finding out. (By the way, we found one of their hiding spots, in a little cave. It reeked of weed and had smoke all over the walls. Wow.) If you’ve never been there, skip all the stuff on the west side of 1300 East and walk through the west side. I’m pretty sure it goes almost all the way up into the mountains and can become even more interesting than I’ve described here, should you be interested.

There are numerous entrances to Dimple Dell Park. You can park at the trailhead on 1300 East, around 10300 South. It’s right next to the overpass that goes over the park, and just south of the Smiths and 24 Hour Fitness.

I’ve also walked down at 700 East and around 10120 South. There’s a park called Lone Peak Park where you can park your car before walking down into Dimple Dell Park. You can blame the English language for that last sentence.

The last suggestion is going to the Sandy Dog Park at 300 East David Circle, parking, and then just following the trail down into the canyon.