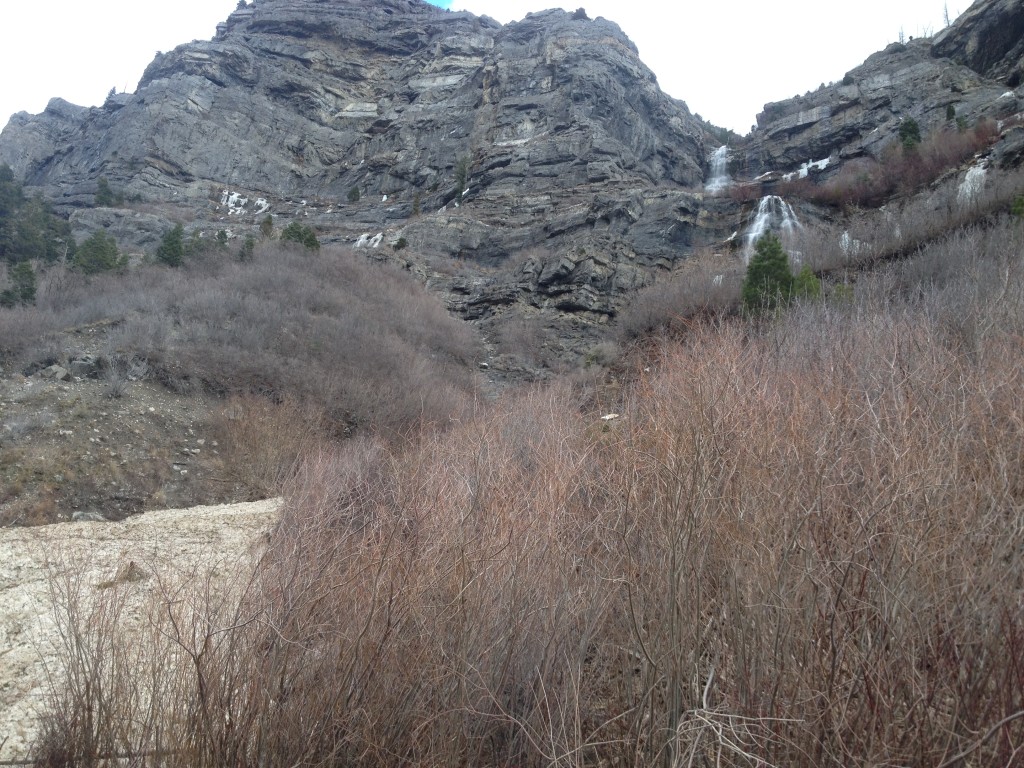 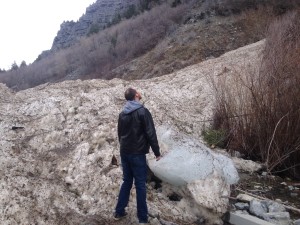 Welp. Guess we aren’t going up there. 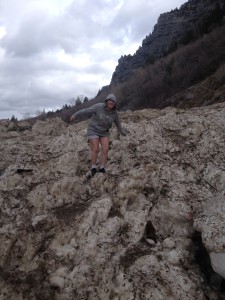 Not a glacier. Avalanche. This is a lot of freaking ice and snow.

Bridal Veil Falls is a super popular waterfall in Provo Canyon, along Highway 189. Basically if you take the 800 North exit in Orem off of I-15, then keep driving east, eventually you’ll pass it on the south side of Provo Canyon. It feeds into the Provo River, which also has a jogging/biking path running along next to it, so you can basically run there if that’s your thing.

The first time I went here was a total bust. I don’t keep up with the news much, but if I had, I’d have known that there had recently been an avalanche (that I believe actually killed someone) and it basically shut down the falls. Some of the walkway was torn out, and part of the bridge was destroyed. That was in March 2014.

In June we decided to go try again, hoping the ice was melted. Good news! It totally was. So here we go. 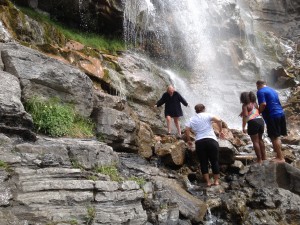 It was absolutely not warm enough for me to do this, and never will be.

There are a few parking lots that will take you to the Falls. One is right next to the old tram that once took passengers from the highway all the way up the mountainside to the restaurant at the top of Bridal Veil Falls. That tram was destroyed by an avalanche I think some time before Justin Bieber was born (don’t quote me on that), and eventually taken down completely in 2008. So the tram station is still there, along with what used to be a gift shop, all boarded up and covered in graffiti. It’s depressing and off-limits. Shame on you for trying to find a way in, because I totally did not. Anyway, this parking lot is practically at the base of the waterfall, where it runs into the Provo River.

We (accidentally) opted for the other parking lot, the one that’s half a mile west. From this particular parking area, you basically get on the “Provo River Parkway”, which is basically a wide sidewalk and not, as the name would suggest, a place you can drive on. On either side are picnic areas and stuff. This is such an easy walk that I got my stupid hopes up for some reason that this would be the one hike I could totally handle. Just walkin’ the dog, feeling breezy, waving to all the people eating their lunches. No big deal. I forgot there would probably be a *real* hike up to the waterfall itself.

I made him climb up there and pose like this. This is why I brought him.

When you get to the base of the falls, you then have to hike up. The pathway is basically at a 45 degree angle. Shut up, yes it is. All the way up. It was, thankfully, a super brief trail. But I still nearly died hiking up. This is, by the way, just the path to get to a good vantage point on Bridal Veil for basic hikers and tourists. REAL hikers, and rock climbers in particular, can keep going. In fact, I hear that some people make it all the way to the top so they can see the old burned out restaurant up there. I actually would totally love to be one of those cool people. On the other hand, I’m chubby and out of shape and hear people die regularly around Bridal Veil, and I decided that I didn’t want to be a headline.

The waterfall itself is pretty neat. It’s loud. Lots of water crashing on rocks and stuff. We came on a day that I want to tentatively describe as “busy” because there were people everywhere. But who knows, maybe it was an off day, and normally it’s crowded like Disneyland. There were lots of people running under the water and laughing hysterically when they got soaked through. I’m allergic to cold and opted not to be one of those people, but still developed a nice layer of hives where the splash kept hitting me. I’m saying that you might need to plan on getting wet.
It was pretty and offered a nice vantage point to watch the highway going by. I don’t think that’s worth a ton, but there was also the whole mountain on the other side of the canyon, and the waterfall. So it was still super nice.

Interesting aside on this… when we were there in the winter, because of the lack of foliage, we could see a decrepit log cabin with a stone chimney in the woods. It seemed to be falling apart. It looked like maybe at some point it used to be someone’s vacation home. It was right off the Provo Canyon Road. I’m still totally wracked by curiosity on what happened to this place. Someone at some point lived there, right? It’s probably not inhabited by a witch or anything, right? It’s abandoned? I wonder why. Like really powerfully wonder why. I can’t find any information about it online, though, so if anyone knows, OMG please tell me. It’s just such a weird location, and why is it falling apart? And who the hell was camping out and having a campfire right in front of it? Argh. I found this far more interesting than the waterfall itself. 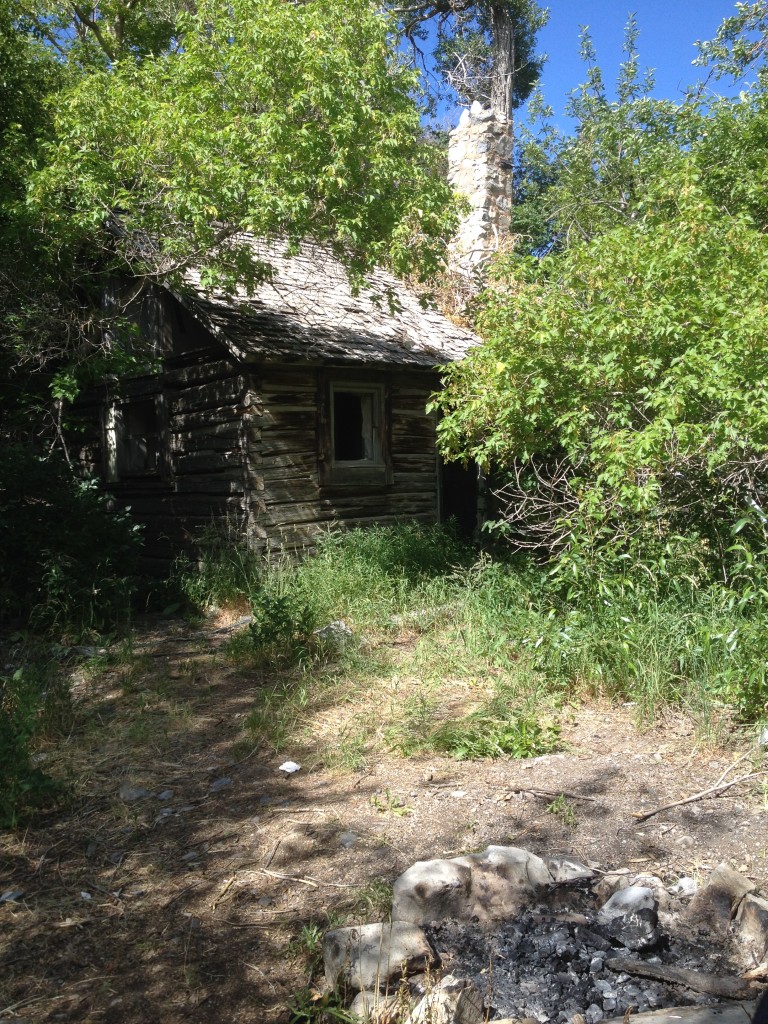 If you’re anywhere but Orem or Provo, take the 800 N exit in Orem, then go east all the way into Provo Canyon, basically. Well, 800 North will end at Provo Canyon Road and you can either go north into the canyon, or south to Provo. Go north, ’cause that’s where Bridal Veil is. There will be two parking areas – the first one is about half a mile from the trail to the Falls, and the other is pretty much right next to the broken-down tram and the path up. If you miss the first one, take the second one, I guess? There’s a road connecting them anyway.