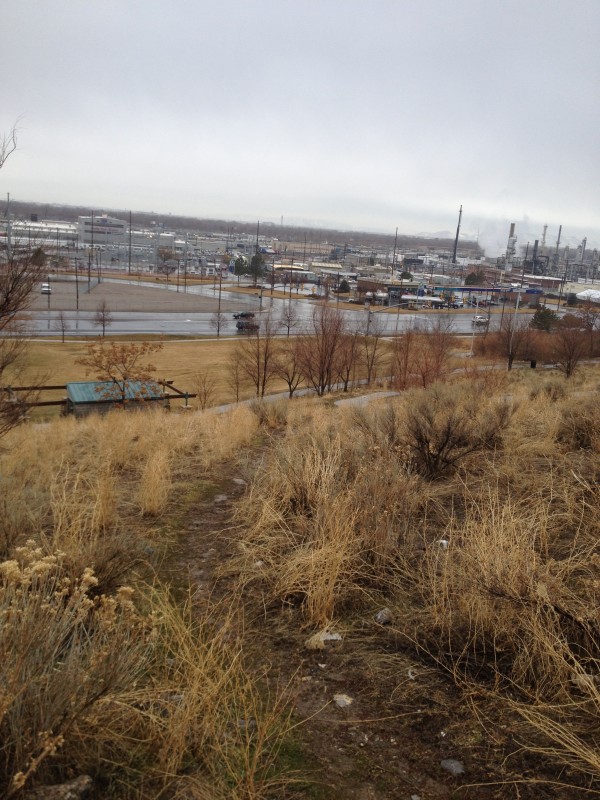 I found out there was a hot springs in northern Salt Lake City, just off of Beck Street. Since Beck is a pretty major road, and I wasn’t going to have to actually hike to it or anything (I am quite lazy), I was super stoked about going to these hot springs.

Warm Springs, it turns out, is basically just a park in SLC with what appears to be a hobo bathing area.

Okay, maybe this is my fault for going here in February. It was pretty cold and snowy and I guess this was the nicest place to wash yourself if you are homeless and don’t have access to a hot shower. But seriously, look at this: 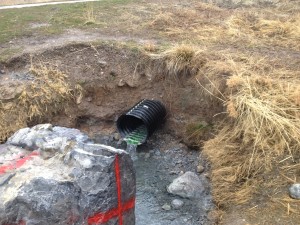 That rock is interfering with the natural beauty of this hot spring.

We almost missed it, actually, since this little thing looks suspiciously like a sewer and is kinda nestled on the north side of the park in between a few jogging tracks. The only reason we found it was that it smelled like sulphur. All around it were empty shampoo bottles and clothing. Just clothing, especially underwear, just scattered around. I’m assuming that people (hobos?) especially enjoyed it because it was, like I said, somewhat hidden. There were tall reeds all over the place. Still, I found it very weird that there are apparently a lot of sulphur-smelling, clean and half-naked people walking around North Salt Lake. 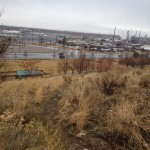 The view from the springs. It’s not, like, a super nice part of town or anything. 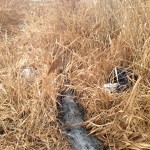 It just sorta meanders off. And what’s that garbage there? Ew. 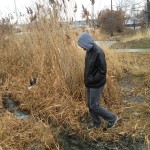 The best part of this particular park, as far as I was concerned, was the discovery of sleeping areas in the shrubs near the springs. Again, I don’t know what this is like during the summer (and I should probably find out some day) but during the winter, apparently people just camp out in the park. We visited right after it rained, so the camps were all a bit flooded – lots of sodden pillows and comforters and, again, underwear. (Seriously, you guys, so much underwear.) My favorite camp was the one we discovered after my boyfriend said, “We shouldn’t go in there, this is how people get murdered.” 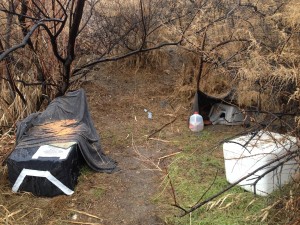 There was a shelter for a cat, complete with cat food, which I thought was pretty damn adorable. Some homeless guy went through more trouble to take care of this cat than I feel like can be reasonably expected of your average pet owner. The guy also had a sense of humor, because that bed contains a printed notice stating something about how sleeping in the park overnight wasn’t okay. I wasn’t sure what was in the cooler, but I assume the heads of every other nosy idiot who came poking around this part of the park, so we left.

The whole thing is surrounded by jogging paths that go basically nowhere. I wasn’t sure how I felt about that. It was a step above treadmilling, I guess, if you’d rather see slightly different scenery in a circular fashion when you run. Warm Springs itself is basically a no-show. There were minnows living in the water immediately next to the “hot springs” outlet. Psht. I mean if the water isn’t hot enough to kill all the life inside of it, can it really call itself a hot springs? (Answer: No. It cannot. That’s why it’s called “Warm Springs.” More like “Tepid Springs” TBH.)

In summary, this is a place I would recommend visiting. In the daytime, in the summer, with a friend or two, and leave the car running. It’s a bit spooky over here. It’s probably not bad if you don’t have an overactive imagination, though.