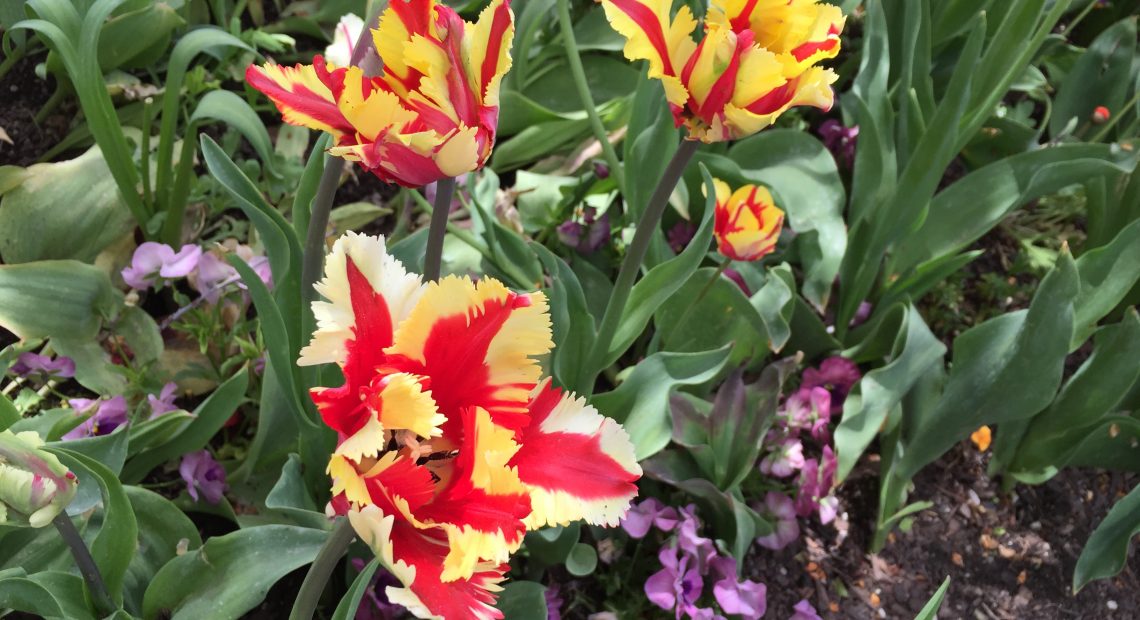 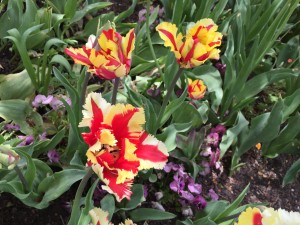 So, normally I don’t like to pay to go on hikes and walks. Like you don’t have to pay to get Fifth Water Hot Springs or anything, which is part of its appeal as I don’t like to pay for the privilege of being exhausted and sweaty. I made an exception this last Saturday for two reasons: A. The Tulip Festival at Thanksgiving Point Gardens is supposed to be pretty awesome, and B. I actually have a family membership at Thanksgiving Point so I paid doodley squat to get in. (That’s after taxes, you guys.)

Let me explain what the Gardens are: They are some gardens. Huge numbers of gardens. It’s a pretty big area, actually, full of gardens and sculptures and landscaping and “themed garden arrangements”. Fifty-five acres of this, to be exact. I was not expecting this when we decided to go. To be honest, I made the incredibly wrong assumption that it was going to be some kind of casual stroll (a jaunt, if you will) around a somewhat modestly-sized park with lots of flowers. I assumed at this time of year, they would be tulips. I guess I was picturing a handful of acres. I wore sandals and didn’t eat before going despite getting both blisters and hypoglycemic easily. That’s how certain I was. So let me just tell you up front that if you’re as easily worn out and/or lazy as me, and you plan on walking around and seeing everything this place has to offer, please wear nice shoes and bring some granola bars.

Photography can get kinda competitive during the Tulip Festival. 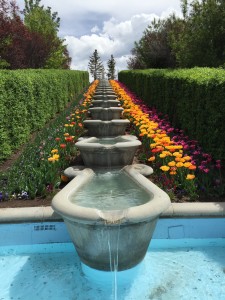 Everyone on who goes the the Gardens posts this picture on Instagram. Go check. We’ll wait.

The Tulip Festival is this big deal at Thanksgiving Point Gardens. I’d heard indirectly about it and seen some advertisements on the huge billboard outside the main Thanksgiving Point building, and my husband and I were like “Oh, we should totally go to there.” We have a membership, it’s free, and it’s either that or actually get started working on our yard, and screw THAT, right? 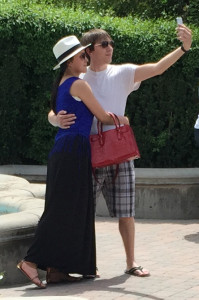 This was half the crowd at the Tulip Festival. Me included. P.S. If you’re the couple in this photo, you guys were adorable.

I didn’t realize it was actually kind of a big deal. On the way to the Gardens, there were signs everywhere in the shape of tulips with arrows. Then we got to the Museum of Natural Curiosity (AKA the Children’s Museum) and were redirected into overflow parking. We were directed to park at the very end of a row in a huge dirt lot. By the time we applied sunscreen and got out like five minutes later, the entire row was filled with cars. And then we had to take a courtesy shuttle from there to the actual Gardens entrance, which is a bit further down the road past the Museum. There were a lot of people. I was pretty amazed at how popular this event is. There were some food trucks, music, bounce tents and games for kids, and more inside the Gardens.

There was a booth out front offering free camera rentals courtesy of, I think, Nikon. Inside, everyone was taking pictures. I knew there’d be a few people taking close-up shots of flowers, but it was pretty incredible how many cameras there were. I started just taking pictures of other people taking pictures, because I am that kind of jerk. There were actually a ton of people there in very nice clothes, clearly taking family photos. Lots of little girls in freaking cute little dresses. One group was there for graduation photos. I spent the whole time torn between laughing at everyone for being so cheesy and taking family portraits at the Tulip Festival, and wishing I’d brought all my kids in nice clothes and a nicer camera to photograph them with. 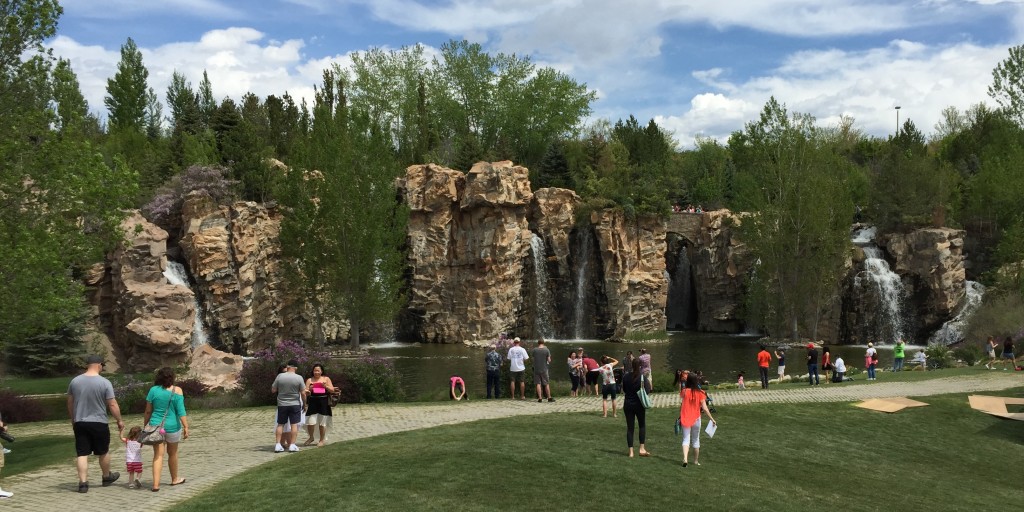 The largest man-made waterfall in the United States. 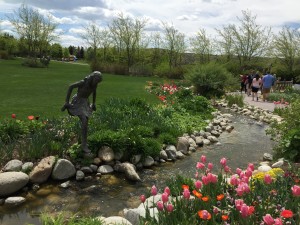 There’s a reason they were doing it. This place is photogenic to the max. Everything is gorgeous. Really, that’s not even hyperbole. There are miles of perfectly paved cobblestone pathways and perfectly manicured grass. No trash anywhere, only a couple of muddy sections (it rained earlier on the day we went), ridiculous numbers of beautiful flowers, tons of statues and sculptures to pose with, perfect little streams with perfect little purple flowers growing next to them… it was really amazing and as cynical as I am, I was kinda touched by the wonder of man-made nature. The waterfall in particular is pretty epic. I got some video of it in slow motion for no other reason than to have slow-motion video of the waterfall at Thanksgiving Point Gardens. I also got video of some koi in their lake. I don’t know why. It’s kinda cool though. 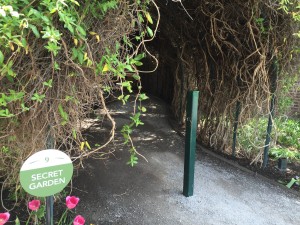 You guys, if you have a sign, your garden isn’t really secret.

Why You Should Go Here

It costs $15 for adults to get in, but the price is worth it. I mean look how pretty this place is. You get to see this amazing man-made waterfall, a ton of flowers, the best landscaping you’ve ever seen, and a bunch of themed gardens. For example, there’s the Italian one that sort of reminds you of ancient Rome, a Greek-inspired garden, a garden designed to attract butterflies, another garden with lots of aromatic flowers, some kind of Jesus-themed garden with lots of Jesus sculptures, and a “Secret Garden” for children that is modeled off of the book. We only spent a couple of hours here and probably didn’t see everything. And what we did see, we didn’t inspect too closely or spend a lot of time perusing it. But I could see coming here with my membership and just sort of hanging out with my kids and letting them explore the Secret Garden, or runs their hands under some of the waterfalls. I’m hoping to go back there this fall so I can see if the leaves turning add anything interesting to the view. 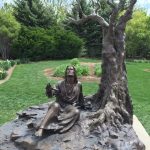 This was in the “Light of the World Exhibit”, AKA the Jesus Garden. 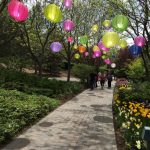 I saw this and immediately decided I needed this in my backyard and then immediately forgot to do it. 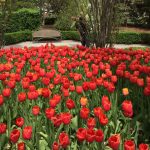 It’s super simple. Take the exit at Timpanogos Highway (just south of the point of the mountain in Lehi), go west, and then turn right onto Garden Drive. You’ll pass the Museum of Natural Curiosity on the left and then you’ll basically be in the parking lot for the Gardens.