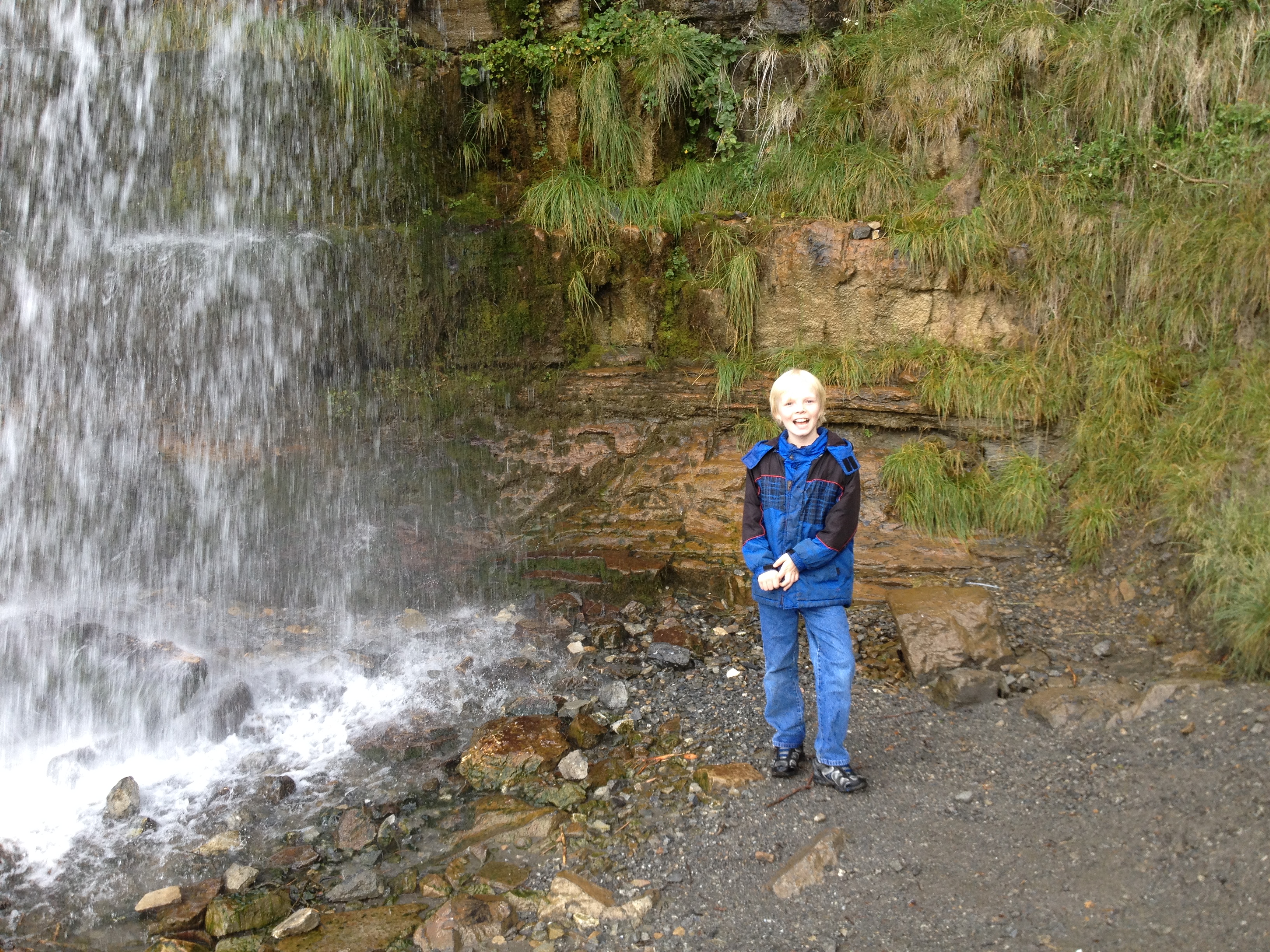 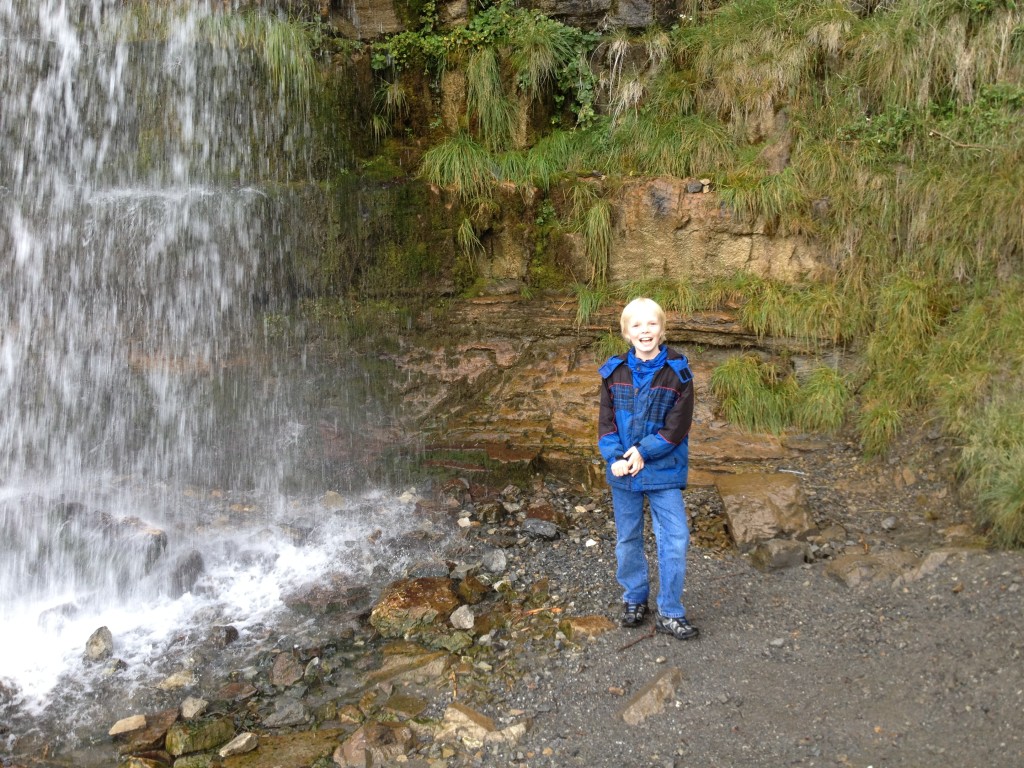 Nic at the base of the falls. 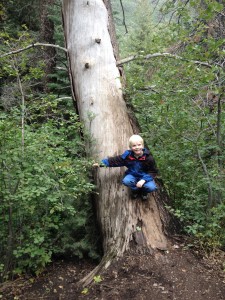 Stewart Falls is a two-tiered waterfall located near Sundance Resort and Mt Timpanogos. There are several ways to get up to the Falls. One of them involves riding the ski lift at Sundance all the way up, then jumping off and walking for a while. I hear that’s the easier way. We chose the route beginning at the Aspen Grove Trailhead, right off the Alpine Loop Scenic Byway. There’s a campground down there and you get to drive past a TON of rich people on your way up. I can’t emphasize how fancy these houses were. Oh, and tons of joggers on that Byway, which is extremely wind-y, narrow, and slow. You will wonder many times whether or not you’re lost, if it’s worth it, and if your car is going to overheat or brakes will fail.

Anyway, once you get started on the trail, there’s pretty much immediately going to be climbing. Not, like, rock-climbing, but the kind where someone half-assed some stairs into the trail with roots and rocks and you have to sort of clamber up because you’re getting old and chubby and out of shape. This will happen within a few hundred yards of the parking lot, and you will immediately question your recent decisions in life. If you’re me.

Power through it, and you’ll start seeing some super pretty foliage. We went in August, but everything was pretty warm, green, shady, and pleasant. In fact, being so high up the mountain, it was actually kinda cool and my son decided he needed to wear his coat. The trees are huge and pretty and very gorillas-in-the-mist. 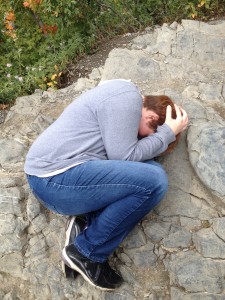 This is me at the very top of the trail. This is how I felt. This is when I decided I would die up there.

The trail takes you over a few mountain ridges. Don’t get your hopes up to get to the falls quickly. You won’t. You’ll get to the top of one ridge, look out over the valley and the nearby fancy homes with well-rested rich people and think, “I could be home eating ice cream.” Press on. Small children, pregnant women and adults with children riding on their shoulders will nonchalantly pass you by, barely breaking a sweat, and you will simply need to accept that this hike is strenuous for you, but apparently not for everyone else.

Towards the very end, you’ll come to some rough ridges with what appear to be recent rock slides and trees with the roots jutting out where the cliff is being eroded away. There will be children climbing around these rocks and roots, precariously close to the edge, looking for everything as though you’re about to witness some sort of tragedy. You’re going to want to yell at these damn kids, while looking for their obviously ignorant jerk parents. You shouldn’t. They’re not your kids. Keep going.

Once you crest that final hill and you see the falls ahead of you, you’re going to feel pretty great that you stuck it out. Also exhausted. Possibly sick. Take a break. Just sit on some rocks and relax for a few minutes. You’ve earned it. Take some selfies. Smile so all your Facebook/Twitter/Instagram friends think this is no big deal and didn’t nearly kill you. 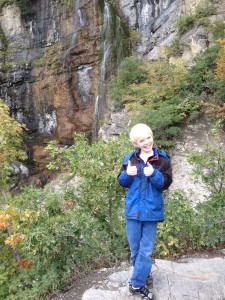 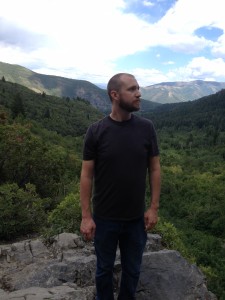 Epic Boyfriend. If you go to Stewart Falls, find this rock, pose on it, and you too shall look epic.

I didn’t really take many pictures on this hike that weren’t of me, my kid or my significant other. I’m sorry to all readers who don’t fall into one of those categories. You’ll just have to Google “Stewart Falls Utah” and see one of the hundreds of other better-quality pictures people take with something other than their iPhone. I can promise you that it was quite nice and lovely and you should definitely make this hike some time.

I should also mention that, on the walk back, it started hailing. Because FML. Really, we were about halfway back and I was half-miserable (endorphins wearing off, meth not taking effect yet), tripping and stumbling and twisting my ankle repeatedly, and it started hailing. We hid under a tree for a while, realized that even if the tree did a good job of keeping the hail off of us (it didn’t), it wasn’t going to stop raining/hailing any time soon, so we just kept going. This combined with the fact that people were just running underneath the falls, laughing and getting soaked through, tells me that you should probably bring a raincoat or a towel or something.

There are actually two ways to get there. Either way starts with taking 800 North in Orem (exit 272) and heading east towards Provo Canyon. Turn left on US 189 (Provo Canyon Road) and keep driving into the canyon. You’ll pass Bridal Veil Falls (make sure you wave) and probably a ton of places to go rafting on the Provo River. Turn north/left onto the Alpine Loop Scenic Byway. Basically like you’re going to Sundance. Drive down the Alpine Loop, past Sundance and all the rich people houses, for about 9 1/2 miles. It’ll be super windy and mostly uphill. Just past the Alpine Lodge and Aspen Grove Family Campground is the Aspen Grove Trailhead. From there you can hike either to Stewart Falls or Mt Timpanogos.

The other way involves using Sundance’s ski lift, riding it to the top, and then hiking some more. I’ve never done it that way and I have no idea if or how it works, so hopefully someone can fill me in on this.