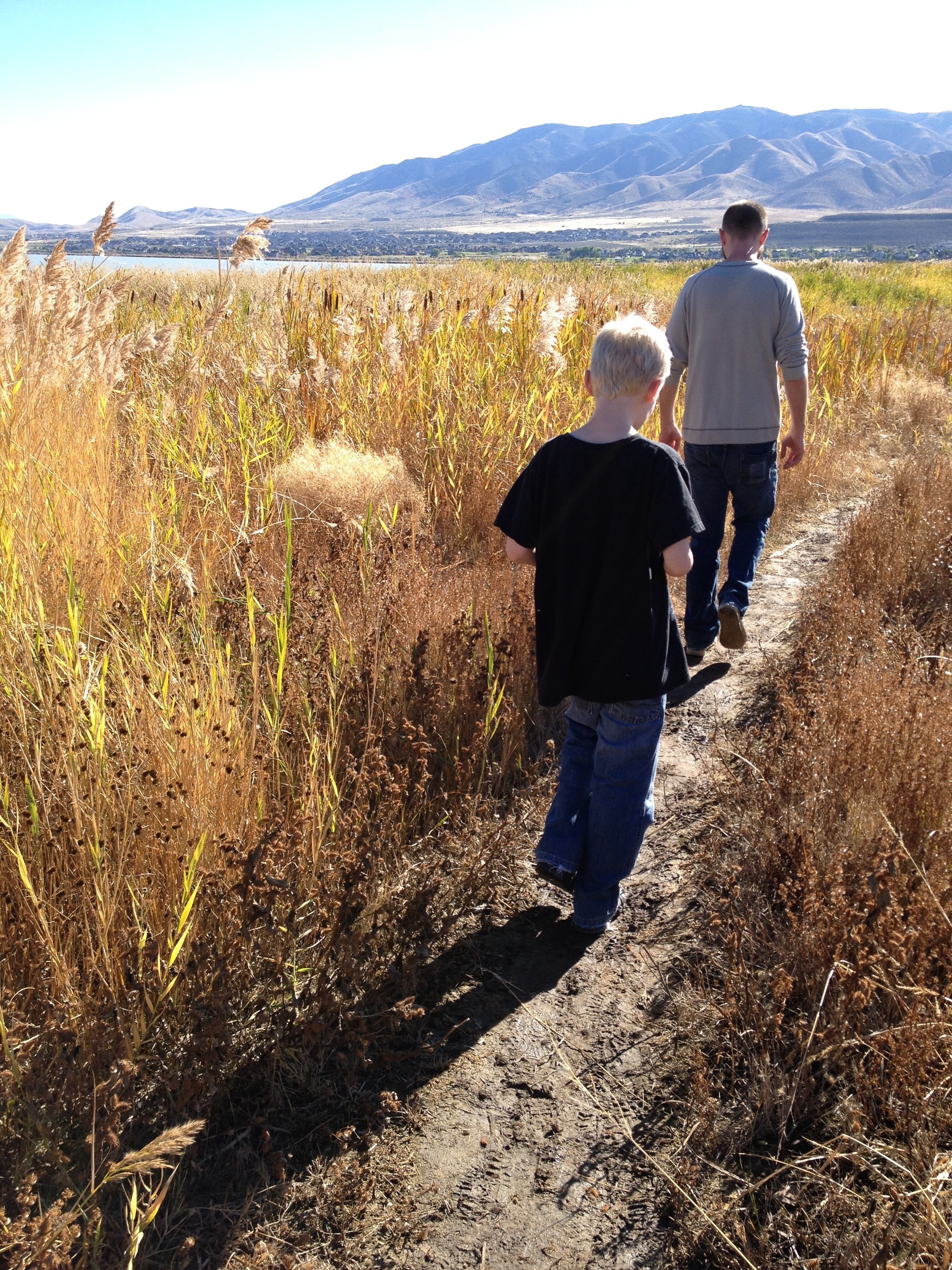 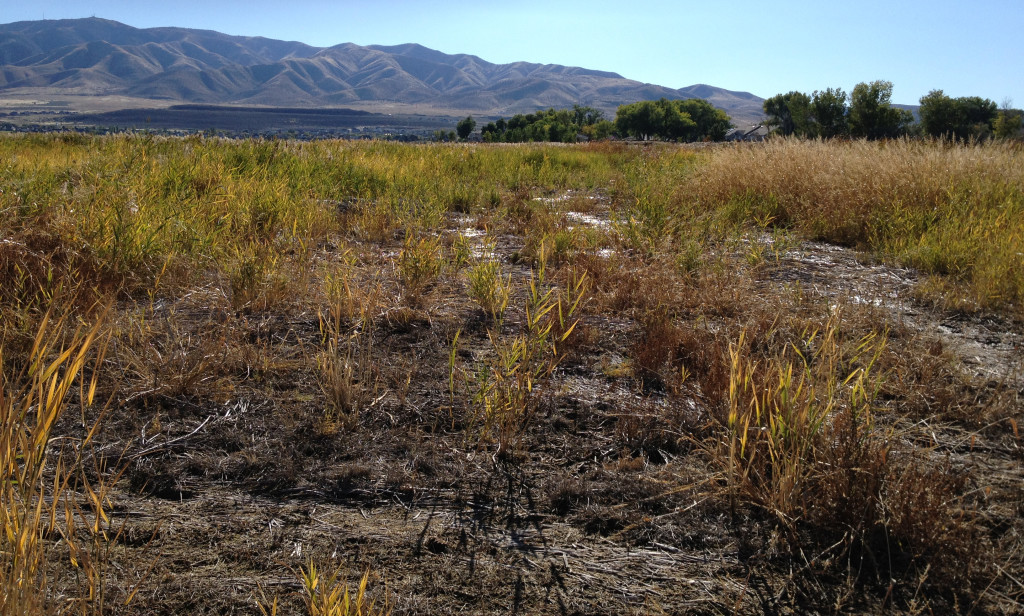 The vast expanse of muddy nothing that is most of this park. 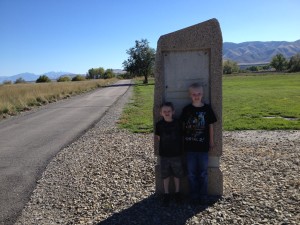 I think this stone used to say something important about the springs, though I’m not sure why the space needed to be so large.

Saratoga Hot Springs, also known as Lehi Hot Springs, is located about 1/4 of a mile from a main road running through Saratoga Springs, on the north west side of Utah Lake, near the source of the Jordan River. There’s a parking lot, right off of Saratoga Drive, that is also a pavilion and playground. On the south side of the park, you’ll see a huge stone marking the beginning of the path to the hot springs pools themselves. 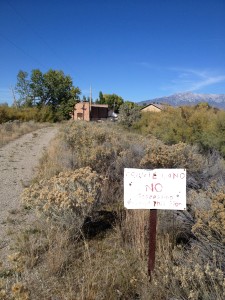 When I came to visit with my three kids and the BF, we did not see this stone. Somehow we managed to avoid the whole thing, and wound up hiking off to the west on a trail that involved crossing an extremely scary-looking, rusted out metal grate/bridge. If you see such a bridge, turn back. You have gone the wrong way. We didn’t realize we went the wrong way until we got to a big sign that basically said, in not so many words, “This is wrong. Please go back.” Also, a slightly shady-looking potentially homeless hairy person came up at us from out of the woods, and even though we hoped he was just a hiker looking for the springs too, it’s also possible he was burying someone. Or his own poop, whatever. So consider yourself informed. You want to go to the south side of the Saratoga Springs Park and Pavilion.

You’ll know you’re going the right way when you see a very wide, paved trail heading off into the woods. This is where you want to be for this particular jaunt. 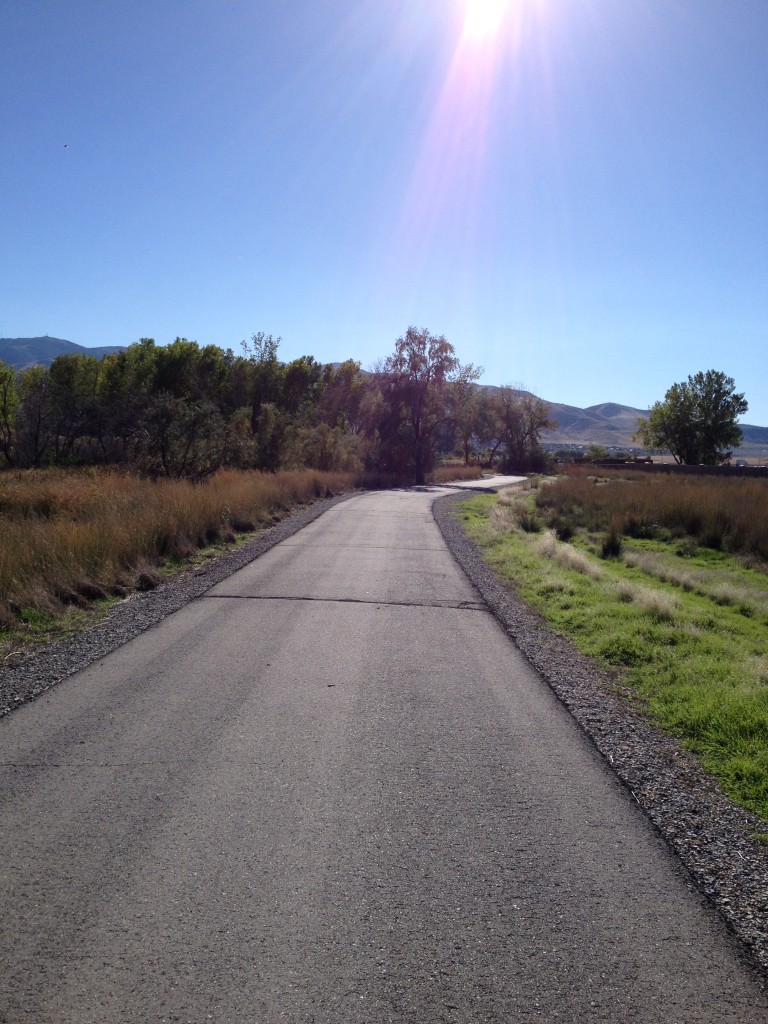 The trail towards the springs. Grueling. 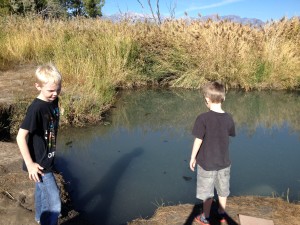 Yep. It’s a hole with water in it, all right.

So let me just get this out of the way right now: This hot springs sucks. It was easily the most disappointing of all the hot springs I have seen. Remember the blog I wrote about Warm Springs in Salt Lake City? (You don’t, nobody reads our blog.) This was somehow worse. They both could be more accurately described as “tepid”, first of all, and they’re both kinda dull, don’t require any special effort to find, and they both are surrounded by trash and articles of lost clothing, which is disgusting and somewhat confusing. I mean who got naked, swam in these tepid springs for a bit, and then just forgot to get dressed again? Didn’t they notice their underwear was missing on the walk back to their car? Anyway, I digress. This hot springs was just a let down because it required more of a walk to get to than Warm Springs, so it was more disappointing when we found it. Also it gets muddy, or it did when we visited. 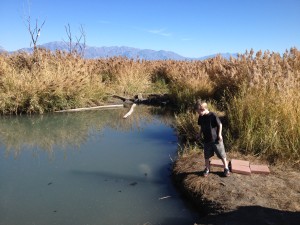 Checking for floaters. You know what I mean.

Supposedly there are several pools. We found exactly one. I assume it was the most boring and dirty one. There were things in it. We were literally checking to make sure nobody had left a body or poop or something in it. I think there were pipes and pieces of wood and bricks and all sorts of bizarre things. The most baffling part to me was that this springs has enough of a reputation for skinny dipping that it’s regularly patrolled by presumably stern-faced, disapproving officers… but who the hell is getting naked in that? We were afraid to get too close in case someone accidentally slipped in and wound up with sludge on their feet.

After standing around it for a while going “Yep, there’s a hot springs,” we decided to go find the other pools. Perhaps they would be more enjoyable, was our logic. We never did find these other pools. We walked around in the mud for a while before finally deciding that there was no way that these hot springs would be exciting enough to keep wandering aimlessly through the mud and reeds. 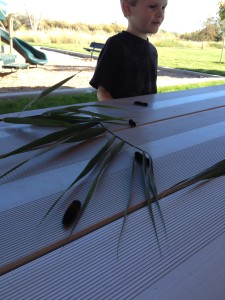 OMG they’re like adorable little wiggly pipe cleaners! I wanted to craft with them.

The good news is that on the walk back, we found a ton of adorable fuzzy little caterpillars. I scooped them all up like I was collecting Pokemon, giggling like a child the whole time. I think we got more than a dozen. I love caterpillars. They’re seriously the cutest and most awesome of all the larvae in the world. That’s a deceptively high bar, by the way. Anyway, we caught a bunch and just brought them back to our house in the hopes that they’ll hibernate and/or turn into moths.

In summary, I’m going back to this hot springs again. It’s not much of a drive, it’s an easy walk, there’s nothing particularly bad about it… it’s just boring. But I am determined to eventually find those other pools. (P.S. If you know where they are, please tell me, we were wandering around for like ever.) I will withhold further judgment on the value of these hot springs until I find them, but as of this moment, my recommendation is to skip these hot springs unless you’re really excited by dirty ponds of lukewarm water, live nearby and want to go for a walk, or are just plain bored. 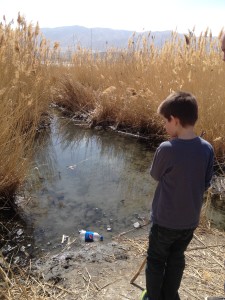 He might be just 9, but he knows damn well this hot springs sucks.

I’ve gone back to check the springs out again, this time with my stepson and husband, to see if maybe I was wrong the first time around (who knows? maybe they’re actually amazing!) and to try to find the other pools. I mean for all I know, maybe visiting it in the fall was the problem. Maybe the water looks better in the spring?

I did find the other “pools”. It turns out that they’re just dirty ponds where the hot water from the main springs has accumulated on its way down to Utah Lake. They’re not new springs or anything. The first one that you come to is pretty much it. There’s a trail kinda behind the springs – several, actually, each of which takes you to a very muddy place. That’s about it. Just lots of mud. It’s nothing really worth seeing, if I’m totally honest. Just check it out on Google Maps and call it a day.

The fun part was forging my own trail through the reeds. I was like “Screw the trail, let’s just tromp through these reeds right here, unless you’re a COWARD.” Jon called my bluff and then I had to do it and get all scratched up and exhausted because that is what my pride is worth, you guys.

Here are some pictures of the muddy expanse: 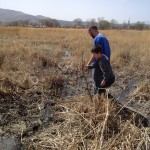 Trudging through the muddy nothing.

Jon’s facial expression sums it up. 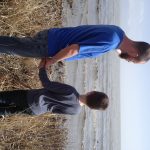 Okay, this was pretty tender as far as pics go, but yeah, it’s pretty much mud otherwise.

Pretend you’re coming from I-15. You’ll take exit 278 (Main Street) toward American Fork. So, um, west. The road turns into Pioneer Crossing, which you’ll just sort of hang out on for like 4 or 5 miles. Then you’ll go left/south on 2300 West. 2300 West will go south initially, and then curve west and turn into Saratoga Road, before turning south again. There will be a park on the east/left side of the road called Inlet Park. Don’t park there. Park in the second parking lot, immediately to the south of it. Though if that one is full, whatever. Anyway, there’s a big fat paved trail going off to the south. Follow it and you’ll be at the first spring.