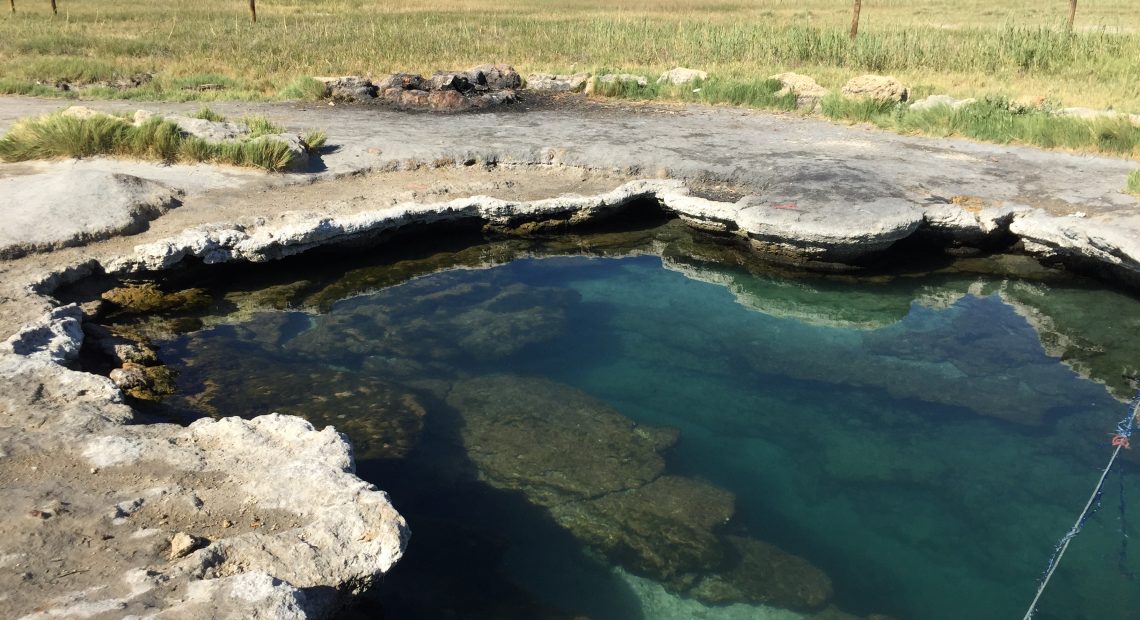 “If you’re here alone, you can piss right off.” 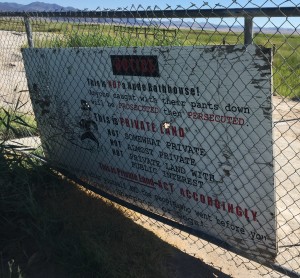 Seriously, do NOT get naked here.

Basically this is a hot springs that just sort of sits in the middle of a cow pasture. There will probably be cows all around you. This is also private property, so I assume that petting or tipping the cows is frowned upon, even though the sign doesn’t explicitly say that you can’t. It does, however, go out of its way to explicitly forbid nudity, so wear clothes. When I visited at around 4:30 PM on a Saturday afternoon, there were a lot of people around. It was actually pretty crowded, with no nudity. Most people seemed to be passing through on their way somewhere else, and just stopped to swim in the springs. 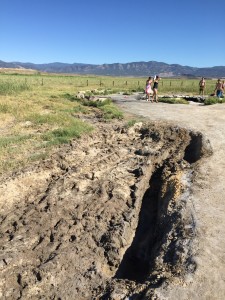 I feel like some people were more careful with their ATVs than others.

Once you get to the springs, you’ll see they’re arranged in somewhat of a triangular pattern. The parking area is at the very top of the triangle, to the north of the springs. The pools are connected by paths that look good for ATVs, but aren’t safe for driving a regular vehicle on. I learned my lesson from Monroe Hot Springs and absolutely did not try to drive my van down the path. Apparently if it rains, the path gets very muddy and then solidifies with ATV tracks in it.

Walk south, and you’ll get to the eastern pool, which is full of pretty warm, pretty clear water. I’ve seen other sites refer to it as being 100 degrees, but honestly, even on a hot July day, it was only around 90-95. Certainly no warmer than the Crater at Homestead. The water is extremely clear and you can see all the way to the bottom, which is… I think about 12 feet? I didn’t lean in too close because I was clothed and carrying an expensive phone to take pictures. There’s moss growing around the edges, so it’s not crazy hot or anything. 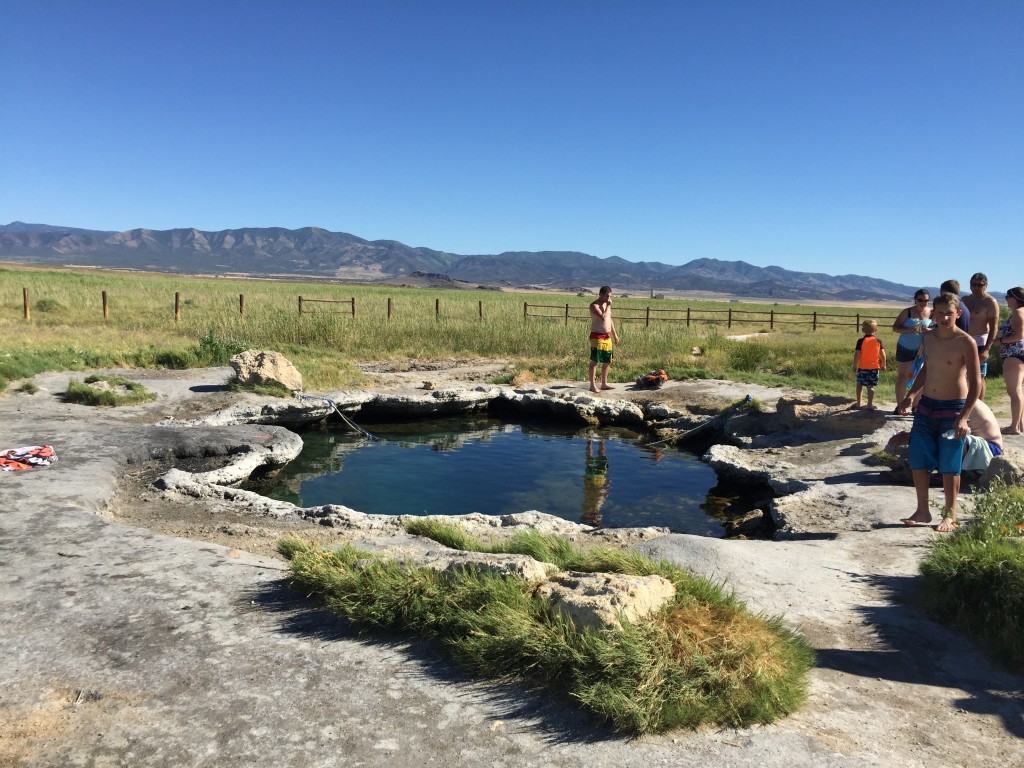 The eastern-most and hottest pool.

If you keep walking to the south, you’ll get to the southern pool, which is somewhat cooler and bigger than the eastern one. I’d say it was in the warm 80s. The bottom was gravelly, and as one person there described it, “springy.” He also tried to get me to jump in, with my stupid capris and bare feet, and I was like no sir, I am just here to record and observe.

It felt pretty comfortable – not too hot, not too cool. Lots of kids were jumping in and splashing and having a pretty awesome time. The water wasn’t as clear as the first pool, but that may have been due to all the people in it kicking up dirt and stuff.

The southern-most and popular-most pool.

The last pool, or the first one if you came from the west in the parking area, is the coolest pool. It’s still relatively warm. If I had to guess, I’d say it’s tropical fishtank warm. Like maybe 72 degrees. It also had a ton of fish living in it. I don’t know how they got there, but they’ve clearly been cheerfully inbreeding for a while. There were some pretty cool-looking color combinations. Part of this spring is super shallow, and if you want to wade around in silty mud for a while, this is the right spot for you. I did it and felt pretty gross when I finally got out. There’s also a dock that allows you to jump into the pool, which I absolutely would not recommend since you can only see a few feet down and the fish get steadily bigger and bigger the deeper you go. So that’s nasty. 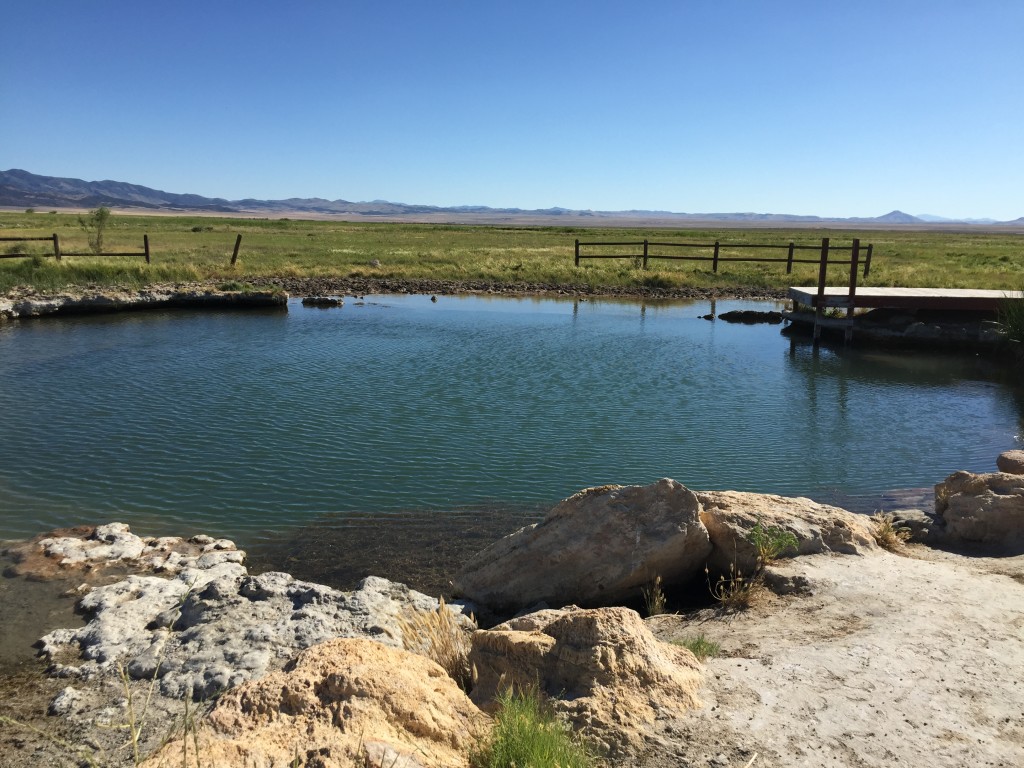 The western-most, coolest, and most fish-ful pool.

Take exit 158 off of I-15 and go east. You’ll pass by a Shell station, or some other gas station if this article is terribly out of date. You’ll drive through a tiny, tiny town. Eventually the buildings go away and after only about 1.4 miles from the freeway, you’ll get to a gravel road on the right (west side of the road) that goes off towards the freeway. Turn there and then drive west, over the freeway, and past a ton of farms. Watch out for cows. Seriously, I nearly freaked because there was one just chilling on the side of the road. No fences or anything. Just chilling. Anyway you’ll do this for nearly 5 miles when you hit the parking area. It’s at the end of the road, so it’s basically impossible to miss.

I suggest just swinging by here on your way to someplace more eventful, like Las Vegas or Provo. It’s worth the time to stop and see how pretty it is, and maybe get in and swim if you’re not a wussy like me.