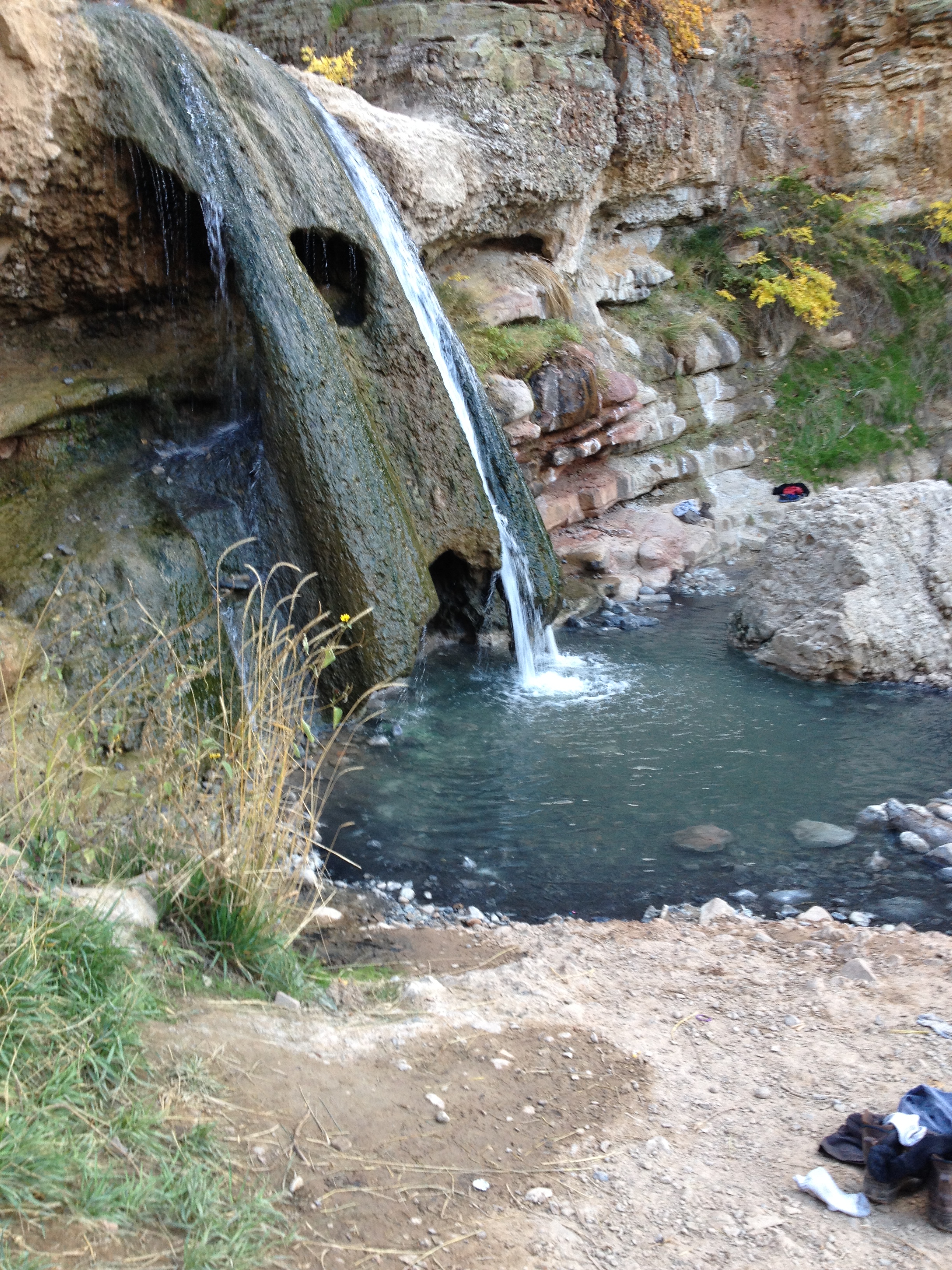 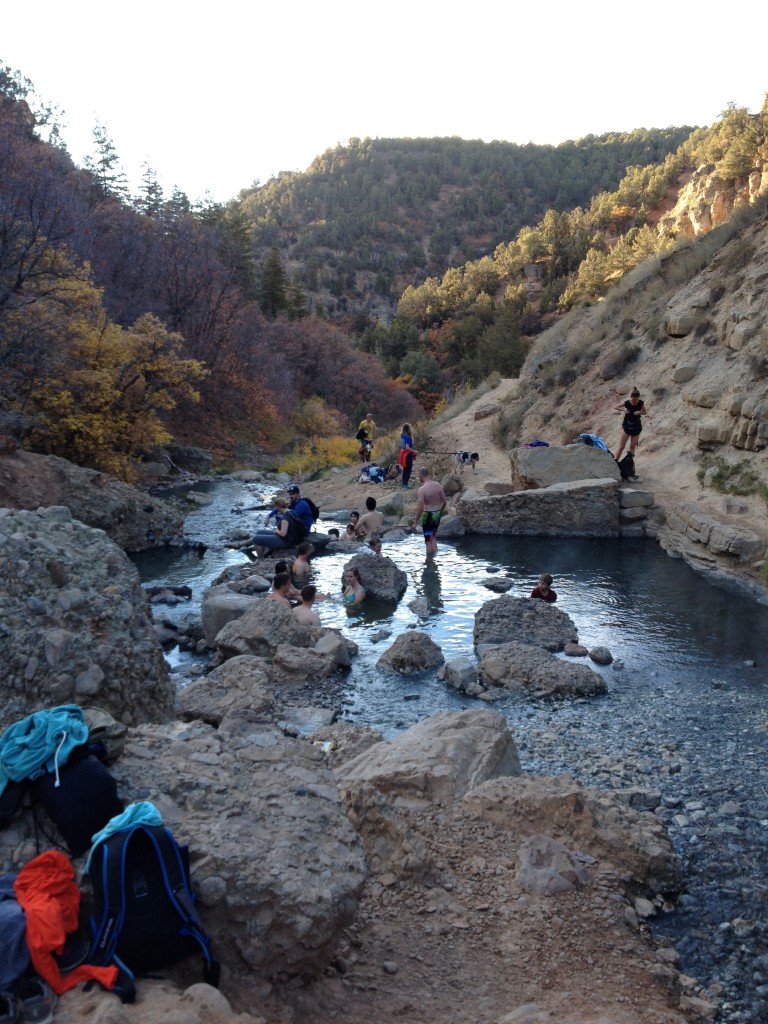 In October 2013 I started dating my fiancee (possibly husband by the time you read this) Jon. Jon’s into hiking. Jon’s more athletic and in better shape than me. And Jon is super cute. So when he asked me if I wanted to go hiking to Fifth Water with him three days after I met him, I was like “OMG YES I LOVE HIKING.” He told me that it was a super easy hike and I would have no trouble. It’s only like a mile or something to the hot springs. That’s what he said.

We both lied that day, is what I’m getting at. 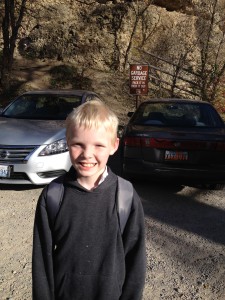 Almost exactly a year later, we decided to do this hike again to see if I was still in the same miserable shape I was when we first started dating, and also to see if the hike was as awful as I remembered. (I am, and it was.) This time I was smart enough to wear sneakers instead of fancy ankle boots with heels, which I assumed would make a difference. (It did.) We also brought my son Nicholas, who functioned as our pack llama and carried water bottles, granola bars, and Gushers, most of which he ate about halfway to the springs. It was also his job to make me feel bad about my relative state of health.

First, I just want to say that this hike is actually nearly 2 1/2 miles to the springs. It also gains in elevation, so a lot of that is uphill. If you are as physically fit as me, then you will want to die by the time you reach the top – or your endorphins will kick in, and you’ll feel awesome. Either way, be prepared to walk for a long time. 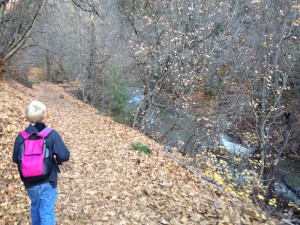 Basically at this point you’re just walking all over the pretty fall colors.

Second, it’s totally worth it and really pretty and if you do it in the fall, as I have twice now, it’s really pretty. I wish I’d gone just a little bit earlier in the year because the autumn foliage in Diamond Fork Canyon is, I hear, spectacular. We got there just in time to see a bunch of yellow leaves on the ground. Glorious. And with that bit of brown contrast from the mud (it’s a well-traveled, moist trail) and green from all the evergreens, it’s pretty nice. Just see it in September, I think is the point.

The trail gets a bit narrow in places, especially the places where you’re up against rocks on one side and a canyon with a stream/river in it on the other. It’s also well-traveled and you will run into a lot of people. Also, parking’s a bitch. Don’t plan on being able to park right next to the trailhead, ’cause it isn’t happening. Oh, and the previous sentence about narrow trails also applies to the road on your way to the trailhead, and also, the trailhead isn’t marked super well. So Google directions, and then save them to your phone, because you also won’t have cell reception back there. I know this because we intended to meet Cassie and her husband on this trail, who arrived 15 minutes after us and proceeded to wait another 15-30 minutes for us to arrive (even though we were already on the trail) before giving up and starting. I texted them and they didn’t get it and just don’t plan on your phone working is all. 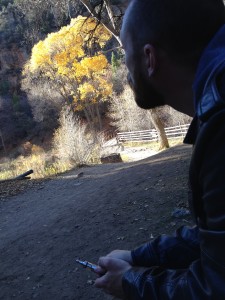 E-cigs can enhance the experience by working in conjunction with “exercise” to deprive you of oxygen.

About halfway to the hot springs, there is a bridge. It’s a nice bridge, and you can take pictures on it. It seems like a lot of people do. Others just cross it. The choice is yours.

Once you’re past the bridge, the trail starts going pretty steadily uphill. You’ll notice the water to the right of you getting more and more slate-gray and blue. It’ll also start stinking like sulfur. The stronger the smell of sulfur, the closer you are to the hot springs. In this section, I saw a woman doing this hike while wearing what appeared to be platform flip-flops. She was having trouble. I do not recommend it. Also, someone had to abandon their stroller. Don’t bring strollers, guys. 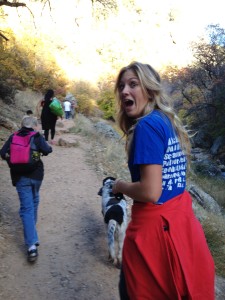 About halfway from the bridge to the hot springs, Cassie and Kyle caught up to us. I knew this would happen, because they are just plain healthier and can hike faster than me, but it was still demoralizing.

Once you get to the hot springs themselves, they are pretty spectacular. There are several pools, many of which have been sectioned off by rocks to allow people to soak in them. The pools are also different temperatures, and some are too hot to even wade through comfortably while others are perfect hot tub temperature. 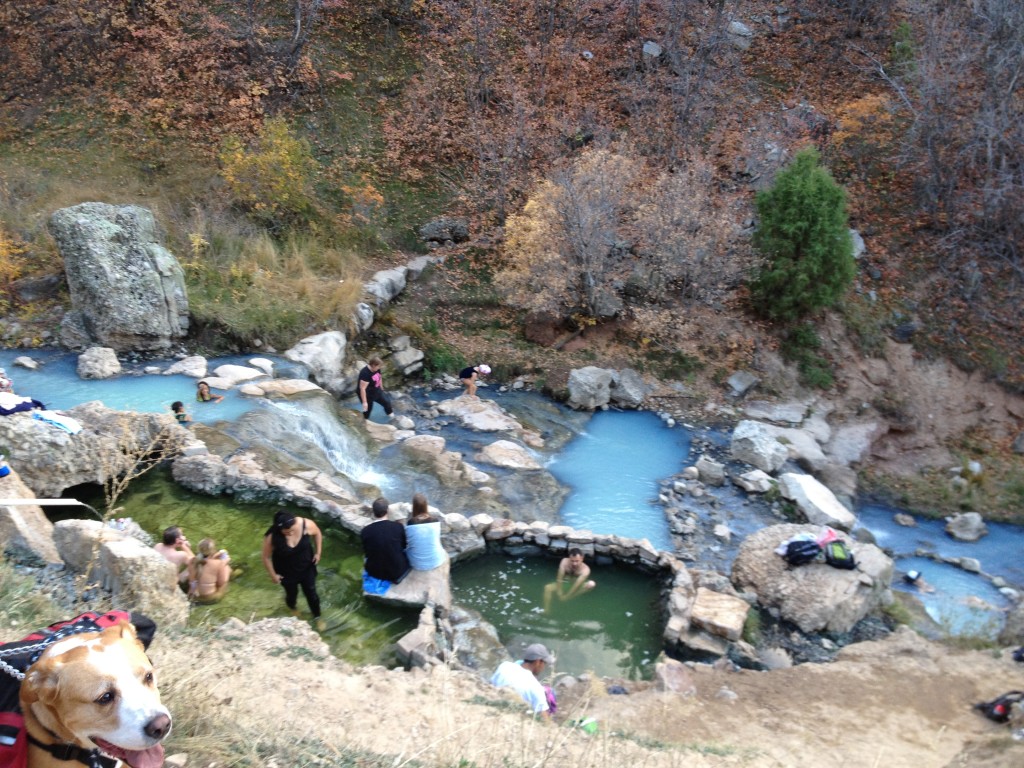 Be on the lookout for nekkid people. Because of the aforementioned hot tub temperatures, some people choose to get nekkid in these pools. I was disappointed to see that none of these people were present this day, but it does happen.

As you can see from photos, this place is beautiful and amazing. Even if you’re a pathetic computer nerd wimp like me, the hike itself is completely worth it. Even a second time. In fact, maybe I’ll go again soon. Maybe. 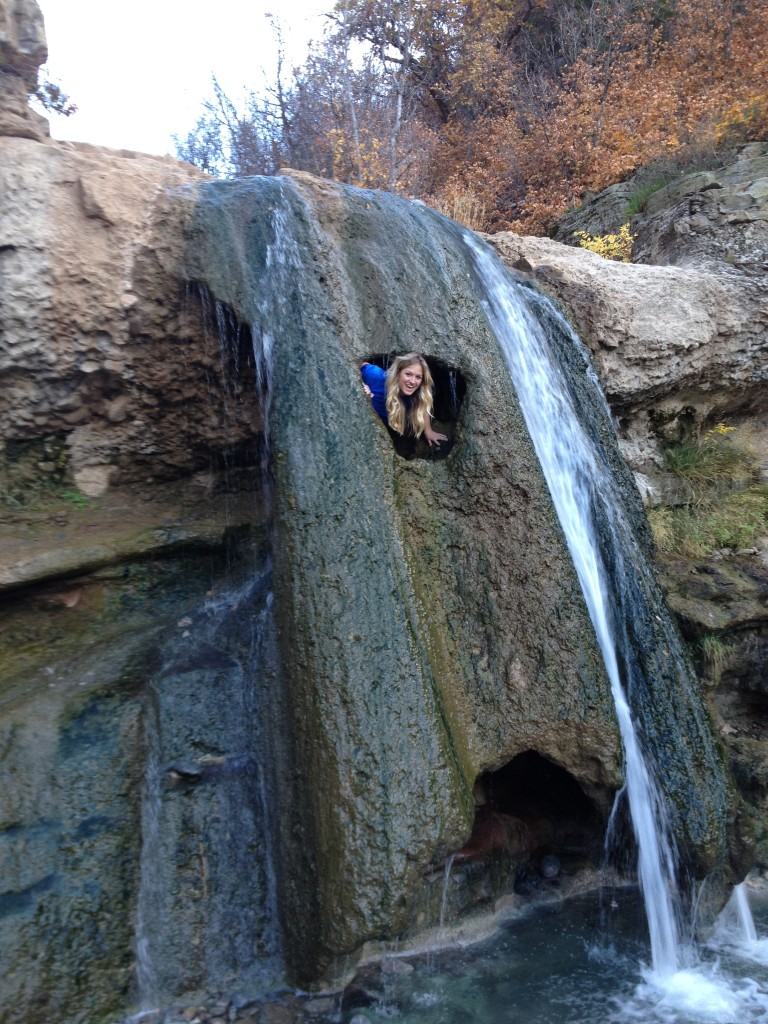 Take off your shoes and go wading, or bring a swimsuit and soak for a while in one of the many pools. It’s pretty stellar and you should do it just to say you did something cool once in your life.

Also, the hike back down is infinitely easier, especially thanks to those good ol’ endorphins.

This one’s a bit tricky, and really only gets easier after you’ve found it once or twice. If you’re starting on I-15, take the US-6 exit in Spanish Fork (exit 257b). You’re going to drive east on that road all the way into the canyon. There will be huge windmills on the right, by the way, as you go into the canyon. They’re pretty cool. About 15 miles from the freeway exit, you’ll see Diamond Fork Road on the left. Turn onto Diamond Fork Road. Be prepared to lose cell reception, by the way. Also, if you come through here in the fall (around mid-September, or so I hear), the trees look fantastic. Anyway, you’ll drive on Diamond Fork Road for just under 10 miles. It will feel like significantly longer than that, and it’s a long, windy, narrow road, so be super careful of idiot drivers. There will be a little road off to the right with, very likely, tons of cars parked around. It’s a very popular hike. I can’t remember what they say, but there are Park Service signs around labeling the parking lot, too. Once there, the trail itself is pretty clear. Just follow all the other hikers til you smell sulfur.

Well, we went back for 2015. I was in even worse shape than the year before. It’s just getting worse and worse. I don’t know how I’m going to get through 2016, to be honest. But we’ll try. Anyway, here are the photos: 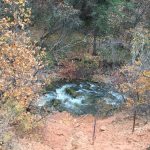 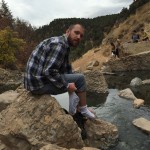 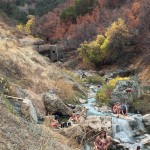