Shoots is a Chinese restaurant located in The Shops at Riverwood, which is an awful fancy name for what is basically a strip mall. The BF, daughter and I were in the area this particular evening looking for Tucanos Brazilian Grill, because man, that place is awesome. But the line was stupid long and we were like, man, screw it, let’s go home. On the way back to the car, we saw this place, and believed it was a suitable alternative, even if it was basically the booby prize after missing out on Tucanos.

It turns out we would have gone here anyway if we’d known about it. And we have gone back, actually, a few times since we found it in October 2014.

It’s pretty nice inside. There are plants and the tables are nice. I honestly don’t have a whole lot to add here, but I feel like “ambiance” is something people care about, so let’s just say that the ambiance was “pleasant” and “relatively quiet if you don’t count us giggling and being morons.”

As far as food goes, it was pretty typical for a Chinese-American restaurant menu, the food portions were on the huge side for the Chinese and on the small side for Americans, and it was all pretty delicious. I got the Firecracker Chicken because I love sweet and spicy stuff, and it was exactly as delicious as I hoped it would be. We got fried ice cream for dessert, which was appropriately delicious as well. It wasn’t totally greasy and over-fried or over-battered, as some Chinese restaurant food can be, either, and the chicken was easily identifiable as “chicken” and not just “mystery meat product being labeled as chicken but with an oddly darker, greasier tone”. Just pleasant and nice. 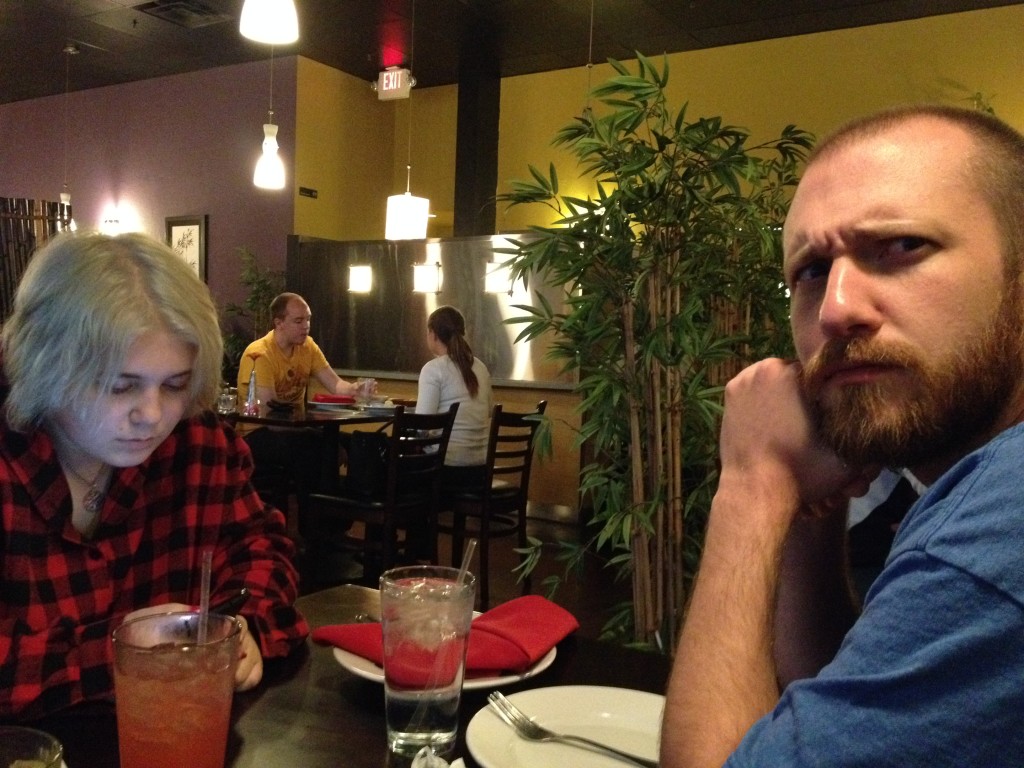 I take pictures most everywhere we go, and this is typically the response I get.

The service was good. The waitress was nice and attentive. We were seated pretty much immediately. I thought the only shame was that it was Friday night, and this super nice place with good food wasn’t as busy as it deserved to be.

Basically, yes, it was a nice place and you should try it out if you’re into Chinese-American food. Don’t go there expecting authenticity or anything, but do go if you like Chinese food but don’t want to eat it out of a styrofoam container. Though, if you do like styrofoam containers, they do offer carryout and delivery. So either way, try this place, it’s pretty nice.

This place is in the middle of The Shops at Riverwoods, which is an outdoor mall located on the corner of North University Ave and 4800 North in Provo. 4800 North turns into Center Street in Orem. I know that’s all kinda confusing but look at this map. Shoots will be right next to Tucanos Brazilian Grill.