Milagros Restaurant in Orem, UT is a nice little family-run place that serves Mexican food. It’s within walking distance of my house and usually has signs out front that say things like “EAT HERE OR STARVE.” So I figured I had to try it out.

I don’t have pictures of this particular occasion because even though I swear to God I took pictures, I can’t find them anywhere. So here’s a picture of what it looks like from the outside, according to their website (which I don’t disagree with): 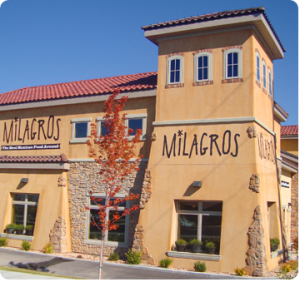 So the boyfriend and I walked in on a Friday night, and immediately a little girl came over and asked us if we wanted to be seated. I was like, “uh, this is awkward, little girl, but do you actually work here?” (I didn’t say that. I was just thinking that.) I mean she was wearing a shirt that said “Milagros” on it but she was also maybe 10 or something, I don’t remember. We were looking at the menu, trying to decide if we wanted to eat there, and an older woman then asked us if we wanted to be seated. I don’t mean she was “an older woman” as in “elderly”, I mean she was older than the little girl but probably still only like 25 or something. Anyway, moving on, we eventually were seated in the corner of the room. It was nice.

There was some boy walking around with a guitar, serenading the customers. It was also nice. The best part was that he somehow knew better than to come over to our table. I would have been nice as well, but it would have been awkward for me. But having him serenade someone else? That was nice.

The food itself was pretty awesome. I liked it quite a lot. My favorite thing about it was that it didn’t rely on grease to make its case. Jon prefers greasy slabs of Mexican food, but I have a strong preference for being able to identify the things that I’m eating, and this place was great for that. I’m not exactly a health food nut, but I found myself thinking things like “Wow, this looks pretty wholesome” and “I don’t hate myself after eating that.” Food Babe would have approved. Not that it matters, since she’s an idiot, but she could have pronounced all the ingredients for sure.

Anyway, my judgment was that I liked this restaurant. It wasn’t horribly expensive, especially not for the quality you get. I thought it was funny that a small child was going to seat us, but also sweet that she’s developing a work ethic early. The service was pretty good and they were pretty on top of stuff. and my waiter was hot. (Not as hot as the boyfriend, but nobody is.) I’d recommend going here if you like Bajio-type Mexican food in a restaurant setting, and if you think Rancheritos and Betos are way too greasy.

Take the 800 North exit in Orem, go East, and then turn left on 900 West. It’s pretty much right there. I mean it’s super obvious. If you need help finding this place, then what you really need are some glasses and rudimentary reading skills.