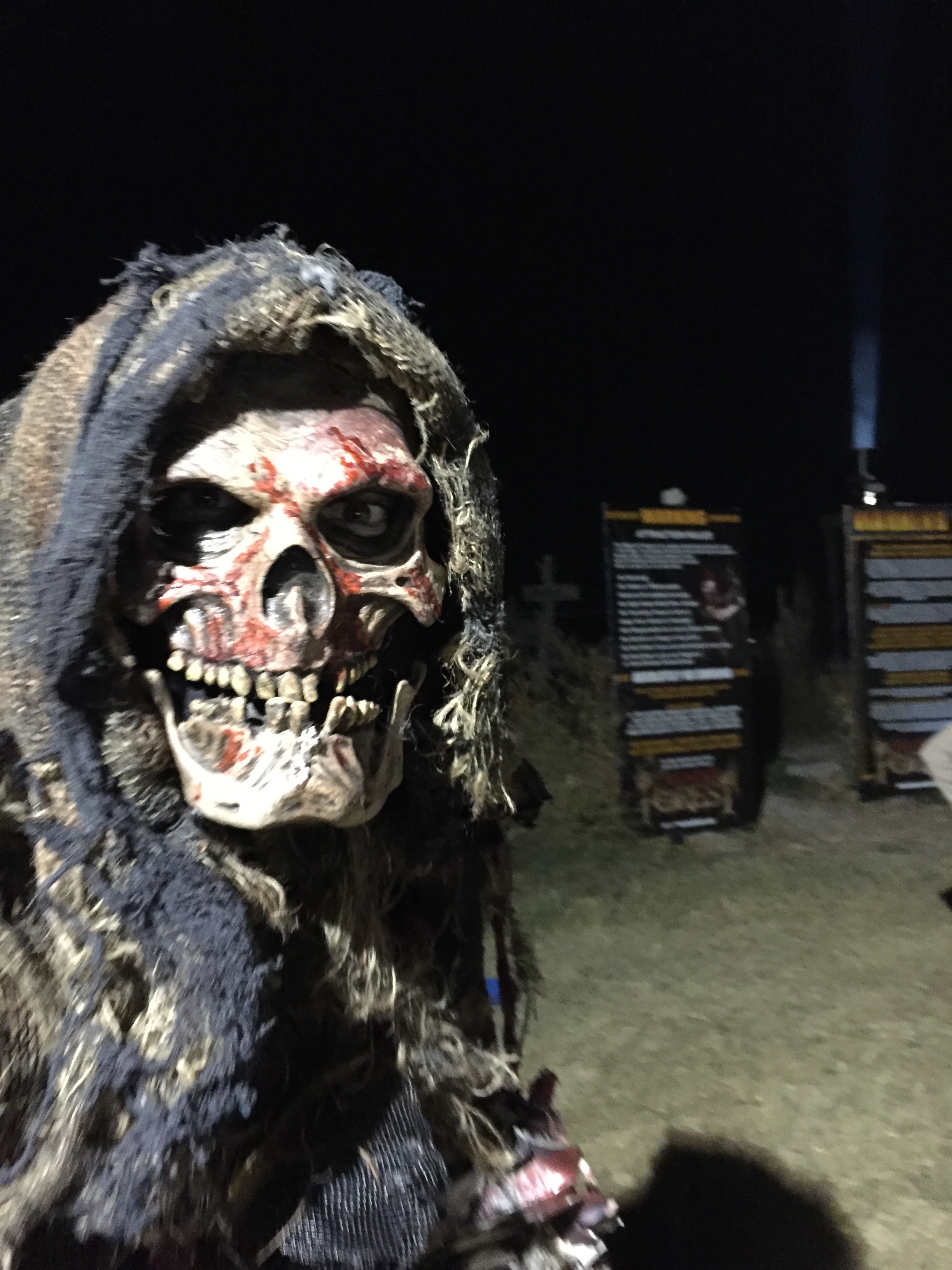 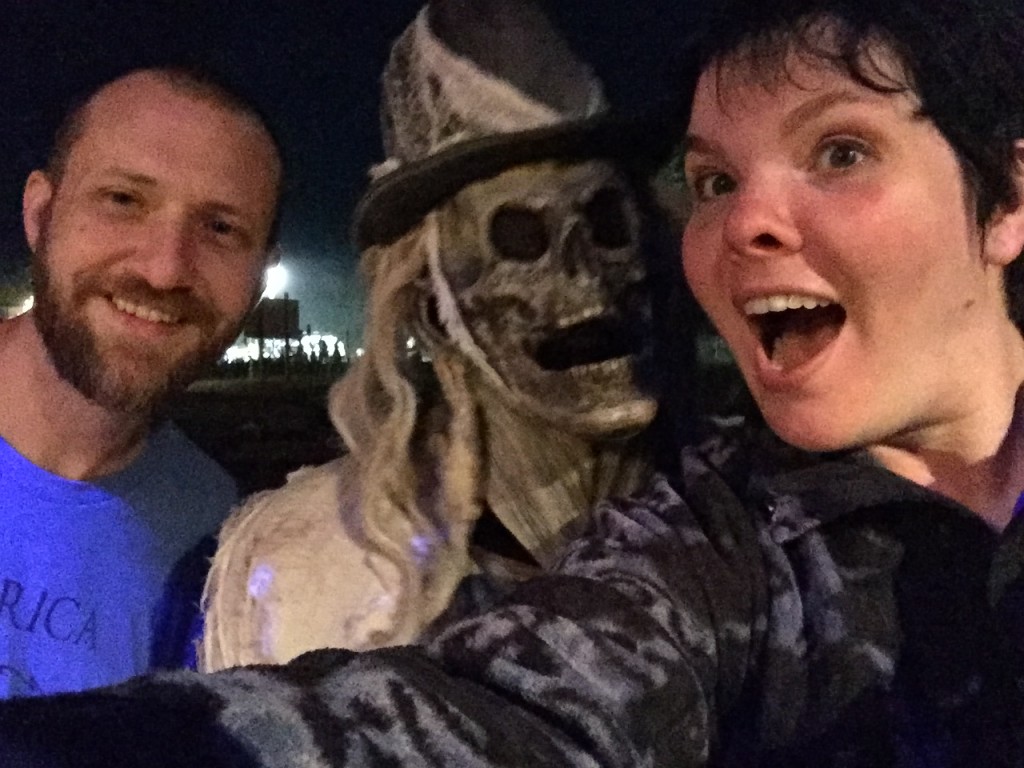 This is part one of my infinitely-parted series, “Haunted Houses in Utah.” I’ve been to a ton, and if you’re a haunted house connoisseur like me, you might like to know ahead of time which haunted houses are worth the ridiculous high fee, and which aren’t. As a reminder, you generally cant really take pictures inside a haunted house, so I’m only sharing photos from outside the building.

The Haunted Forest is in American Fork. I got slightly lost trying to get to it because I took 100 West trying to get there, and apparently you just take the Pleasant Grove Blvd exit and go west instead. It’s sitting right next to the edge of Utah Lake, by the way, and you literally walk through reeds (the kinds that grow next to the lake) at points, and you get a pretty clear view of the lake as well. Kinda cool, I guess, as far as those sorts of things go. Also, since it’s next to the lake, it’s basically 10 degrees cooler than anywhere else, AND it’s totally outdoors, so bring a jacket even if it’s warm where you live.

So this is one of those places, like most haunted houses, that has several people in character wandering around trying to startle people waiting in line. There wasn’t any line to speak of when we went, so they were mostly just sort of wandering around posing for pictures and goofing off with set pieces. It was actually kinda cool, albeit dead. I hope it picks up in October when haunted houses become more of a thing. 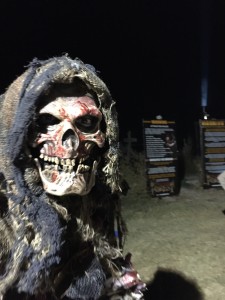 Okay, this is one of those “spoiler alert” moments. If you’d rather be surprised by what kind of things this haunted house has, skip this section and go right down to “Was it worth it?”

This one is almost entirely outdoors, so it’s relying a lot on the fact that it’s dark, kinda long (in terms of walking), and goes under shady trees and through reeds and a cornfield and all that. I don’t have legitimate names for any of this stuff, so I am just making up names for things that I’ve totally seen before, maybe even multiple times. Here we go…

About half of this haunted house was some typical stuff that you see regularly through other haunted houses. I’m not surprised, of course, because I’m used to all of that stuff. But they still caught my daughter repeatedly, which was very satisfying. At one point I watched a dude in a Jason mask coming up behind her, she turned and was so startled she dropped an F-bomb, and it was literally the most satisfying thing ever, up until a bit later when a doll that we were sure was a statue (since several people had passed it unscathed) came alive and scared the bejeezus out of her. I was laughing so hard that “Jason” had to basically shrug at me. I nearly shook the doll’s hand. Thanked them both. Anyway, here we go:

This haunted houses had some cool scenes that I’ve never seen before, or that I’ve only seen rarely. Some seemed like they should be no-brainers, as in “How come I’ve never seen that before? Waaaat?” And some were actually pretty unique. Here’s a list of some of those. 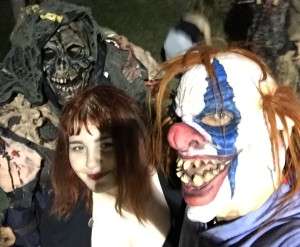 These guys had a sense of humor.

Was It Worth It?

Yeeeeah, overall, I would probably do it again. I felt like it was kind of slow, and some of the actors weren’t really putting their hearts into it, but some of them were actually pretty cool and having fun with their roles. And more importantly, it was a longer haunted house, so we were in there for a good 45 minutes or so, which by itself kinda makes it worthwhile. I liked the views of the lake, I liked the atmosphere for the most part. Some of the set pieces were pretty cool, like the pirate ship or OMG the dinosaur was the coolest thing ever. I also kept thinking, man, we could sort of hide in some sections of this place and just make out with our significant others and that would be fun. (Jon vetoed this idea because he said, that’s how people die in horror films, and he’s right, but still.)

Once we came out, there were a bunch of characters hanging out and taking selfies and photos and stuff with people visiting, and that actually was pretty fun. We got some pictures with a few, and they were totally good sports about it, and getting into their characters while simultaneously taking selfies. I like that sort of thing.

The one complaint I had was chainsaw guy – there were too many of them. I hate that shtick in the first place, and getting three in one haunted house was just annoying. Look, guys, those chainsaws stink and they’re loud and if you’re an idiot and lunge at people with it, sure, there’s no chain, but it’s still gonna leave a nice burn, so STOP chasing people, ugh.

It costs $22 to get in; more if you pay through the website, for a “convenience fee.” I feel like I’ve seen coupons and discounts at various places, so maybe you should keep an eye out for that?